Today’s digital debut of Kodansha Comics on comiXology makes fan-favorite series such as A Silent Voice, Yamada-kun and the Seven Witches, Inuyashiki, and more, available through the comiXology apps on Fire tablet, Android, iOS, and the web at comixology.com. ComiXology fans will have access to new releases the same day as print as well as some digital-only debuts.   With over 75,000 comics, graphic novels and manga from more than 75 publishers, comiXology offers the widest selection of digital comics in the world. ComiXology’s immense catalog and cinematic Guided View reading experience make it the best digital platform for comics fans worldwide.

As revealed September 01  at  Entertainment Weekly, Valiant is proud to announce " OPERATION: DEADSIDE" – a special four-part event storyline beginning this December in NINJAK #10.  Jump on board here as New York Times best-selling writer Matt Kindt (DIVINITY) and superstar artist Doug Braithwaite (ARMOR HUNTERS) – the chart-topping creative team behind the sold-out debut of UNITY – reunite to collide NINJAK with SHADOWMAN for a terrifying descent into an unknown and uncharted plane of existence. 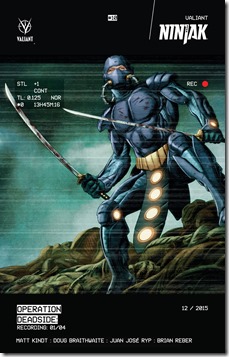 "I’ve been excited to bring Shadowman back for a while… He’s got a pretty dark past and some murky motivations that help him live up to his name,"  OPERATION: DEADSIDE "

writer Matt Kindt told Entertainment Weekly.  "As a writer, it’s some pretty juicy stuff to sink your teeth into.  I also think that reader anticipation and curiosity over the character is another thing that really makes him attractive… So picking up a character like that and catching up with where he is and what he’s done since is going to be pretty dark...and pretty fun." 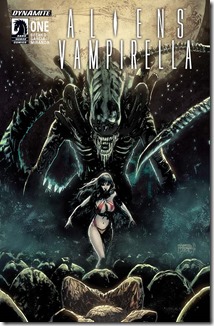 Humans have begun to colonize Mars, but something ancient and sinister got there first. Now Vampirella is faced with a mystery only she can solve, and the bloody realization that some monsters should never be awakened.

Writer Corinna Bechko says, "I've loved Alien since I first saw it as a kid on a crummy old TV in a well-lit room and got scared half to death anyway. Now that I have the chance to add a little corner to that universe I couldn't be happier. And pitting such an implacable horror against Vampirella? That's a meeting that definitely produces very fertile story-telling ground. The Alien franchise has always thrived with strong women in the lead. Smart, self-assured Vampirella is a joy to write for, even when she may have met her match." 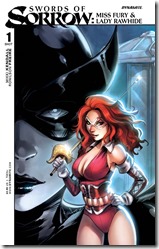 Spawned from SWORDS OF SORROW, the genre-spanning crossover event featuring an all-star line-up of female authors comes this team-up of Miss Fury and Lady Rawhide.

When everything is going wrong, sometimes the only person you can trust is a complete stranger. Can Miss Fury and Lady Rawhide put aside their differences long enough to figure out what’s really going on?

BALTIMORE, MARYLAND - August  13, 2015 - On Saturday night, September 26th, the comic book industry, including professionals, retailers, and fans, will gather at the Hyatt Regency Baltimore to honor the 2015 Harvey Award Nominees for 2014 comic work and present the Harveys to their recipients. This is an exciting evening, highlighted by  host Vivek J. Tiwary, a #1 New York Times bestselling author, Tony Award-winning Broadway producer, and the founder of multi-platform arts and entertainment company Tiwary Entertainment Group.

Harvey Awards tickets are on sale now. Tickets to the event, which includes full cocktail hour (cash bar), full service dinner (featuring a Baltimore Crabcake), awards ceremony, and a gift bag, are now available for $125. Tickets are available at BCC’s website via credit card at baltimorecomiccon.com/tickets.

Host Vivek J. Tiwary's graphic novel,  The Fifth Beatle: The Brian Epstein Story  (Dark Horse Comics), is based on the untold life story of Beatles' manager Brian Epstein. Written by Tiwary, with art by Andrew C. Robinson and Kyle Baker, it received worldwide critical acclaim and won a number of prestigious literary awards including two Harvey Awards including Best Original Graphic Novel and the Will Eisner Comic Industry Award for Best Reality-Based Work. It is a Lambda Literary Finalist for Best LGBT Graphic Novel, an American Library Association Great Graphic Novel for Teens, and has been added to the Rock and Roll Hall of Fame Library and Archives Permanent Collection.

The Fifth Beatle is now being adapted into a feature film that has secured unprecedented access to Beatles music and counts Simon Cowell amongst its producers. Vivek is writing its screenplay and will serve as a producer.

"I learned to read from reading comics with my parents -- and much to their dismay, I learned to make fun of authority from Harvey Kurtzman and MAD Magazine!" said Tiwary, "So what an honor to now host this show named after Harvey that shines a light on creators who are pushing the boundaries of comics and keeping his torch of intelligent irreverence alive."

On Broadway, Tiwary's productions have won a combined 25 Tony Awards. They include such groundbreaking work as Green Day's American Idiot, The Addams Family, A Raisin In The Sun, and Mel Brooks' The Producers. Vivek is currently working with Alanis Morissette and Pulitzer and Tony Award-winner Tom Kitt to adapt Morissette's breakthrough album Jagged Little Pill for Broadway.

Vivek previously served on the Board of Directors for Valiant Entertainment, a multi-platform company that boasts the third largest universe of comic book characters and has secured a 5-film deal with Sony Pictures.

In addition to hosting the awards ceremony, Vivek will be speaking on a panel and signing books throughout the weekend at the Baltimore Comic-Con.