Sadly, this is the last issue of this series to be penciled by Daniel Gete.  Unfortunately, Gete will not be finishing out the final two issues of this limited series  (More mini-series are still planned).  We hope to see more of Daniel Gete’s  work in the future.  It’s still rather early in his career.  In the meantime, rather than turn in a sloppy performance he appears to have cranked it up a notch. This final issue featuring his artwork is a real delight.

The opening two-panel splash page is all art with no captions.  The imagery evokes a sinister shark-fin surfacing as the transporter holding Logan and Jessica breaks through the ice in front of a frosty enclave that they hope will turn out to be Sanctuary at last.  Instead it’s an ice prison of sorts ironically named Hell.  (I promise to skip the freezing jokes.) 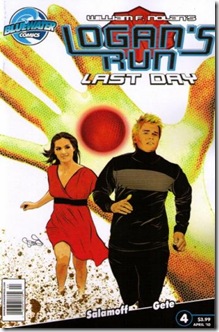 When the “warden” lays down the ground rules  (“fight or die”), Logan coldly declares he’s abandoning Jessica to her own fate.  The look on his face seems grim and determined - - or is it deceptive and calculating?   The uncertainty throughout LOGAN’S RUN: LAST DAY regarding Logan’s position is one of the things I like most about this book.

The fight is savage and brutal, revealing more of Logan’s feral inclinations all dramatically depicted in throat-ripping detail by Gete’s panoramic panel art.

Jessica remains a beacon of hope and optimism throughout the issue, later confiding to Logan beside her in bed that “ I knew you weren’t going to let the Warden have me.  You’re not as cold hearted as you pretend to be.”, while Logan doesn’t comment and just stares stone-faced at the ceiling.

Before they leave Hell there is a narrow encounter with Box, the human/machine creation obsessed with creating glacial art.  It’s a great depiction of this character  (the Box in the movie version is best forgotten) and the form is creative, as if a display from The Human Body science exhibit was cross-linked with the Terminator.

As Jessica and Logan disrobe to pose for Box’s sculpture, Jessica asks about the myriad of scars criss-crossing Logan’s body and asks why he didn’t have New You remove them.  “They remind me that I’m fallible,” he responds, and almost concludes “that I’m hum - -“ before she cuts his speech off with a quick kiss.   Gete shines again in the ensuing fight scenes, even utilizing some diagonal panels most effectively.

A  map leads them to what seems the actual location of Sanctuary only to learn that fellow DS Agent Francis has been tracking them and waits there.  More surprises ensue as the purposes of both Logan and Francis are stated and seem in contradiction. 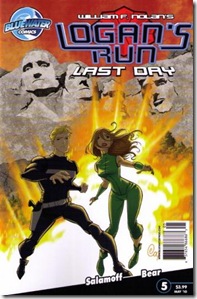 Jacob Bear does a fine job stepping in for Daniel Gete on artwork this issue.  His style is interesting, but different enough from Gete’s to make you notice.  No disrespect to Bear but I miss Gete’s touch here, especially on the close-ups.  The facial expressions on the characters as visualized by Bear just don’t vary enough.  I guess I’ve been spoiled by the neat link between dialogue and body language that was featured in the first four issues.  However,  it would be a mistake to dismiss this issue.  Salamoff’s story really steps it up in this issue and carries the book forward.  (Side note:  the cartoonish looking cover art this issue could create the wrong impression of the contents: this is a mature title.)

There are so many surprises here including brothers, fathers, and the ancestry of just about everybody involved.   The sepia-toned pages of “The Future History” that have been sorely missed these last few issues (rightly so, they would have gotten in the way of the story) are back to explain the origins of this coldly calculated modern society of genetic engineering, cloning, and nanotechnology.   Ballard, the master of Sanctuary, has his own plan to change society again - - and it’s equally cold in its own way.  Everything comes to a head in the next issue, the conclusion of the first mini-series.

LOGAN”S RUN: LAST DAY has been a great series.  Unfortunately, the long delays between issues have seemingly crushed its momentum.  I just don’t hear it discussed or mentioned enough in comics circles, and that’s a shame.  Hopefully, the upcoming trade paperback of this first series will get it more deserved attention.  ( It was one of my Pghhead Picks of 2010).