Having a little more discretionary income this month, I decided to explore some additional titles during my most recent stop at my favorite comics store (CBH).  On my mental note of things to check out were some titles that other BC members have been praising, and BIRDS OF PREY topped the list.

Here’s the short review:             “WOW!  Everybody needs to check this out.  Very, very good.”  (Just doing my part to placate the time-management challenged reader as well as those who get the news in short ‘sound bites” and lack the patience for a more detailed commentary.) 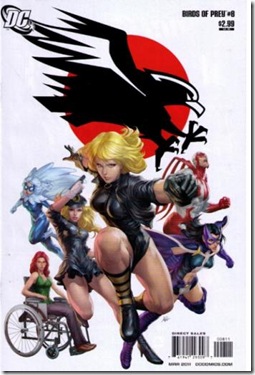 Despite the grim title for this story arc, “The Death Of Oracle”  is not going to be some dramatic event that shocks and saddens DC Nation.  Rather, it’s a turning point in the life of Barbara Gordon/Oracle.  She realizes that now that some ill-intentioned criminals are aware of her existence and even identity- -  that she has to take steps to protect herself and her loved ones/associates.  So in a very calculated manner that is hinted at in Issue #7 and becomes confirmed by Issue #9 she plots her public departure, which will free her up to then pursue her mission undisclosed and under the radar.

The mad villain Calculator blames Oracle’s hacking into his system for his pounding migraines and hatches a plot to kill her by way of trapping her allies/team.  He enlists Current, Mammoth, and a delicious new female  - - Mortis - - to assist his armored assault forces in bringing them down.  Mortis is a gloved and lacy gothic lass in a frilly dress whose deathly pallor and voice are feints to her main weapon  - - a touch that brings a maddening remorse and self-deprecation to almost anyone she touches.   They learn through alleged betrayal of the main area the Birds operate in, and break into a ladies club where Dove, Huntress, Black Canary and Lady Blackhawk are enjoying a birthday celebration complete with male pole-dancers.

Both Oracle and Calculator are engaged in a manipulative game of chess with the same pawn (Savant) acting as spy/informant to both sides.  Oracle isn’t sure that Savant’s story has  totally fooled Calculator, and that was part of her plan anyway. But is Savant really loyal to her?  Mortis takes the gloves off and gets her hands on Black Canary, sending Dinah into a deep spiral of remorse and regret that puts her into a catatonic state while in her mind she battles all the guilt and bad decisions of her past.

The art is fabulous throughout all three issues, in spite of the changes to the production staff every other issue.  My first exposure to the art style of Ardian Syaf came via a Dresden Files book from another publisher.  While his work was competent and somewhat stylish, it didn’t impress me the way that it does here in Birds Of Prey.  Maybe the inker Cifuentes should get some credit for using dark lines, shadows and depth to really bring out the detail in Syaf’s pencils.   And Guillem March, who rarely disappoints, takes over in Issue #8, followed by some stunning work by Inaki Miranda in Issue #9.  And while the artist, colorist, inker and letterers change from issue to issue  - - you could easily not become aware of it unless you were checking the credits page as I was.  The transition from issue to issue is fairly smooth and each style complements the other without affecting the look and tone of this book.  Some credit for that should probably go to Editor Janelle Siegel who must have enforced some artistic adherence to the BIRDS OF PREY style that she wanted to be consistent, regardless of the art team.

The final scenes in issue #9 where Oracle sends in her armored helicopter to attempt a rescue of the hostage Birds sets the stage for the final act  - - and it ends on a cliff-hanger. I’ll be back.

I really like the line-up of characters in this title, and even Batman Bruce makes a welcome appearance in this story arc. (One of the best panels in this story occurs as Batman billows his cape out to float to ground level while some gawkers eyeball and point to him from the upper floors of a parking garage.)  All the characters have bird references in their names (and sometimes their powers), with the exception of Huntress.  I’ll forgive that since she seems to fit so well into the group.  And I like the inclusion of Hawk and Dove, in spite of Hawk being the only male in the Birds’ core team of heroes.   It makes sense to include them, and I love Simone’s depiction of these characters - - sort of a ying/yang, passive/aggressive, black/white combo that finds a way to work together and shield each other’s back/emotions.  I like it almost as much as the original Hawk and Dove team as created by Steve Ditko - - a band of brothers gifted with powers and in constant debate over anti-war versus war-loving sentiments.

Guess I better get my hands on the first six issues and/or first volume of the BIRDS OF PREY trade paperback.