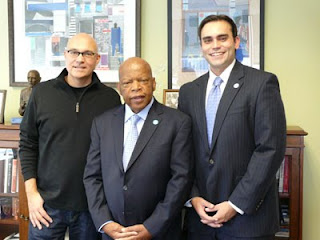 “I am very pleased to be participating in this effort,” said Congressman John Lewis. “This is something I really wanted to do some years ago and there is no better time to do it than now. It is not just a story of struggle; it is a story of involvement. It shows the ups, the downs, the ins and the outs of a movement.

“It is my hope,” said Congressman Lewis, “that this work will be meaningful and helpful to future generations to give many people here in America and around the world the urge, the desire, to seek, to build, their own world, their own future.”

A meditation in the modern age on the distance traveled, both as a nation and as a people, since the days of Jim Crow and segregation, March tells the first hand account of John Lewis’ lifelong struggle for civil and human rights.

“As a proud resident of Georgia, and a long-time fan of the honorable Congressman,” adds publisher Chris Staros, “this is truly a deep honor. To bring, not only his life’s story, but that of the Civil Rights Movement to the comics medium is truly exciting. This will make this historical and timeless message accessible to an entirely new generation of readers.”

An artist has yet to be named for the project though candidates are being actively considered.

JOHN LEWIS, is Georgia’s Fifth Congressional District Representative and an American icon widely known for his role in the Civil Rights Movement.

As a student at American Baptist Theological Seminary in 1959, John Lewis organized sit-in demonstrations at segregated lunch counters in Nashville, Tennessee. In 1961, he volunteered to participate in the Freedom Rides, which challenged segregation at interstate bus terminals across the South. He was beaten severely by angry mobs and arrested by police for challenging the injustice of Jim Crow segregation in the South.

From 1963 to 1966, Lewis was Chairman of the Student Nonviolent Coordinating Committee (SNCC). As Chairman, John Lewis became a nationally recognized leader. Lewis was dubbed one of the Big Six leaders of the Civil Rights Movement and at the age of 23, he was an architect of and a keynote speaker at the historic March on Washington in August 1963.

In 1964, John Lewis coordinated SNCC efforts to organize voter registration drives and community action programs during the Mississippi Freedom Summer. The following year, Lewis helped spearhead one of the most seminal moments of the Civil Rights Movement. Hosea Williams, another notable Civil Rights leader, and John Lewis led over 600 peaceful, orderly protestors across the Edmund Pettus Bridge in Selma, Alabama on March 7, 1965. They intended to march from Selma to Montgomery to demonstrate the need for voting rights in the state. The marchers were attacked by Alabama state troopers in a brutal confrontation that became known as "Bloody Sunday." News broadcasts and photographs revealing the senseless cruelty of the segregated South helped hasten the passage of the Voting Rights Act of 1965.

Despite more than 40 arrests, physical attacks and serious injuries, John Lewis remained a devoted advocate of the philosophy of nonviolence. After leaving SNCC in 1966, he continued his commitment to the Civil Rights Movement as Associate Director of the Field Foundation and his participation in the Southern Regional Council's voter registration programs. Lewis went on to become the Director of the Voter Education Project (VEP). In 1977, John Lewis was appointed by President Jimmy Carter to direct more than 250,000 volunteers of ACTION, the federal volunteer agency.

In 1981, he was elected to the Atlanta City Council. He was elected to Congress in November 1986 and has served as U.S. Representative of Georgia's Fifth Congressional District since then.

ANDREW AYDIN, an Atlanta native, currently serves in Rep. John Lewis’ Washington, D.C. office handling Telecommunications and Technology policy as well as New Media. Previously, Andrew served as Communications Director and Press Secretary during Rep. Lewis’ 2008 and 2010 re-election campaigns. Andrew is a graduate of the Lovett School in Atlanta and Trinity College in Hartford, and is currently pursuing a master’s degree at Georgetown University.

TOP SHELF PRODUCTIONS is the literary graphic novel and comics publisher best known for its ability to discover and showcase the vanguard of the comics scene. Founded by Co-Publisher Brett Warnock in 1995, and partnered by Co-Publisher Chris Staros in 1997, Top Shelf has produced over two hundred graphic novels and comics that have helped to revitalize interest in comics as a literary art form. Most notably, Alan Moore’s FROM HELL, LOST GIRLS, and THE LEAGUE OF EXTRAORDINARY GENTLEMEN; Craig Thompson’s BLANKETS; Andy Runton's OWLY; Robert Venditti & Brett Weldele’s THE SURROGATES, Jeff Lemire’s ESSEX COUNTY, and Jeffrey Brown's CLUMSY & UNLIKELY, all of which have garnered critical accolades from the likes of Time Magazine, USA Today, Entertainment Weekly, People Magazine, Publishers Weekly , The New Yorker, and the New York Times Book Review.