Everything that made Issue #1 such a great read and visual treat is back again in Issue #2.  Writer Paul Salamoff continues to move the story along, uncovering more details and background as the plot gains momentum.  Still, he’s not about to tip his hand entirely.  It’s going to require returning for future issues of this title to see the entire hand he has in play.  Artist Daniel Gete gets a little more comfortable with the style he’ll be utilizing in this title and validates our reason to spotlight him as an upcoming creator to watch. 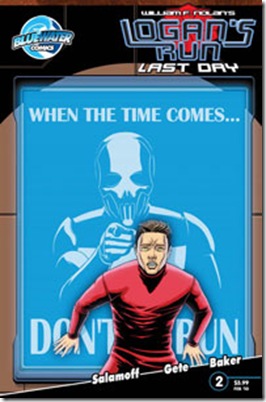 Issue #2 opens with a bang,  a devastating  explosion with radioactive consequences at the end of 2095 that leads to a “nuclear winterland” as the atmosphere becomes polluted while food and water become scarce. It’s a bit of “The Future History”  which actually occurs in  the past of this story.  These bits of background scattered throughout the issue are detailed in sepia and/or black and white tones to help us distinguish them from the full-color present day activities.  It took more than 15 years for the survivors of the human race to form a “new global confederacy” to initiate actions and programs to protect the declining population of less than one billion.   Other bits of “The Future History” in this issue reveal exactly how the mile-high complexes came to be erected to house all still-fertile yellow-stage inhabitants who agree to serve the “Thinker” and submit to euthanasia when their past radiation exposure reaches critical levels 21 years later.  By 2054 the last of the first generation of the war perishes.

The use of these flashbacks should allow readers to follow along easier as the “buzz” builds for this book and more people pick it up.  It enables a newer reader to jump in, and with a little effort on their part become engaged in the story without having to start from the very beginning.

As defined by Salaamoff, Logan is not much of a hero but a “company” man with a deep dedication to his job and a desire to commence the destruction of Sanctuary (the runner’s safe world) and raise his profile to that of a legend among Deep Sleep agents.  Not only is he cold and calculating, but also smug and aloof. We see evidence of this in a locker room scene where Logan snaps back at some fellow agents who ridicule him after they felt snubbed when he failed to acknowledge them.

Logan accompanies Jessica to “New You” where she gets her features altered while Logan’s cover is exposed.  A confrontation leads to some graphic blood-shedding as we learn of the fail-safe device built into a Sandman’s gun. Without a personalized handprint match on the trigger the gun will explode, as Doc finds out when he tries to use it on Logan.   As Logan and Jessica retreat to find Cathedral (an entry point to gain access to Sanctuary)  the investigating DS agents uncover his evidence of “running” . They make a decision to pursue and “take out our own”, removing all trace of murder evidence from the site, including the extermination of any witnesses.  It’s a harsh cruel world. 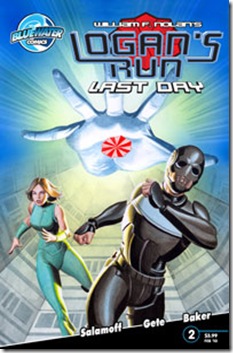 There’s a bit more action this issue, which allows artist Daniel Gete to showcase his work in bigger panels, full and half page caption-less scenes and continued experimentation with wide-screen, angular and over-lapping panels.  Quite often, the point of view is similar to a cinematic tracking camera with head-shots, overhead views, and characters looking straight ahead and off the page.  The art this issue has less of a Perez-feel and more of a Gulacy influence - - but  it belongs solely to Gete  and is not a copy.  It’s just my attempt to describe it by comparing it to other artists who I admire.  It appears that Gete did the colors as well this issue.

LOGAN”S RUN: LAST DAY has quickly become one of my favorite science fiction comic titles.  It has been worth the wait since the first issue came out back in January.  Here’s hoping the publication schedule gets on a more regular track in the future.