Written by Howard Chaykin with art by Stephen Thompson.

A SHORTCUT FOR IMPATIENT READERS:  If you enjoyed the DIE HARD film series beyond the explosions and action and also appreciated the comedic moments as well as the character development of hero John McClane, then you will want to investigate the comic series.

FOR THOSE WHO ENJOY READING MORE IN-DEPTH REVIEWS OF COMICS:  Keep going . . . . . 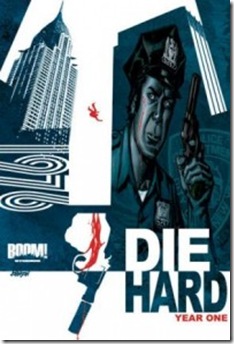 The hard and sometimes difficult reality is that having good friends to share your hobby with can seriously inflate your comics budget.

Good friends share their findings (or “gems”).  I appreciate their generosity and try to reciprocate by sharing some of my “finds”.  The upside is that I get to read some great works that I wouldn’t have sought out on my own based on my comics budget.  The downside is that invariably I enjoy the “gems” so much that I end up adding another title to my want lists.

It’s time for me to quit whining and face the music:   It’s a great time to be a comics reader.  The quality and variety of material available has never been better.  It’s a bad time to try to pare down or budget your comics spending.  I will find balance somehow.  Thank God for my friends.

I admit that this is an odd way to begin a review.  Please be patient and it will start to make sense shortly.

I forgive myself and everyone else who passed over DIE HARD: YEAR ONE on the first go-round.  I thank BOOM Studios for their patience and belief in this title to keep it out there.  (DIE HARD: YEAR ONE is now in its second story arc.)

I remember exactly how it happened.  I saw the initial solicitation for orders in PREVIEWS, gave it a little thought, and decided not to order.  I remember thinking “Aren’t there enough movie and television series revivals/adaptations in comics now?  Do we really want another one?” 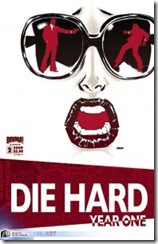 I also had some annoyance at the “YEAR ONE” subtitle attached to this book, as I hold those words to a higher standard.

I will never forget the sheer delight and pleasure in discovering BATMAN: YEAR ONE in the issues of BATMAN #404-407 back in 1987 from writer Frank Miller and artist David Mazzuchelli.  (Short aside:  check out his ASTERIOS POLYP  graphic novel and prepare for astonishment at the break-through visual story-telling imagery.  Great work on scripting also.)  Since it’s publication I have seen the words “YEAR ONE” attached to many flashback issues or series as if trying to infer a connection to that gold standard, and oftentimes failing to come even close to matching its story-telling power.

When DIE HARD: YEAR ONE Issue #1 finally arrived at comics shops I quickly picked it up from the new issues shelves at Captain Blue Hen Comics (Newark, DE) and flipped through the pages, seeking confirmation for my decision and/or giving myself a second chance to purchase it.  “This doesn’t seem very DIE-HARD to me”, I thought. “There’s hardly any action here.  It’s just introducing various characters and more exposition.  No need to explore any further.”

Those readers who had the patience to stay with the introductions and set-up in issues #1-2 were rewarded with a rollicking good crime caper that unravels and comes to suspenseful conclusion in Issues #3-4. 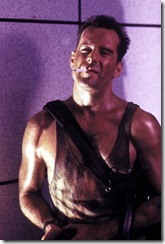 The story takes place in New York City during John McClane’s days as a rookie cop walking a beat.  His training officer is overbearing, lazy and bigoted and also serves as a foil for some of McClane’s pointed barbs and comedic moments.  Events take place during the 1976 July 4th bicentennial celebration as a major crime of serious implications is about to unfold.

I have long admired the work of writer/artist Howard Chaykin but I haven’t liked everything.  AMERICAN FLAGG (First) was ground-breaking.  I did enjoy SWORD OF SOLOMON KANE (Marvel) but it failed to meet my high expectations, being a little too plodding and methodical in places.  I just didn’t warm up to his take on CHALLENGERS OF THE UNKNOWN (DC) at all. 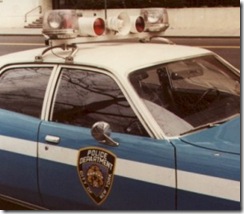 DIE HARD: YEAR ONE may be one of his best works as a scripter.  He does a fantastic job of portraying the crazy, chaotic New York City of the ‘70’s  (long before its’ renaissance) as I remember hearing and reading about it = in decline, crime out of control, dirty streets, corrupt police and politicians.

Like Frank Miller did so well in BATMAN: YEAR ONE,  Chaykin also details the character of John  McClane perfectly, capturing those idiosyncratic habits and moves that came to define him in the film series.  Yet, just like BATMAN: YEAR ONE did so well, you see the beginnings of the final product, still unpolished but clear enough to appreciate and gain understanding into why the current character does things a certain way or operates based on a certain philosophy.

This is a series that requires repeat readings to fully appreciate everything that has been included.  That also applies to the artwork of Stephen Thompson, which appears skilled but mostly functional until that second reading, when you realize that he is very masterful at facial expressions and conveying emotions/reactions through body language.  His background detailing, especially street scenes, cityscapes, and building interiors are very realistic and accurate. 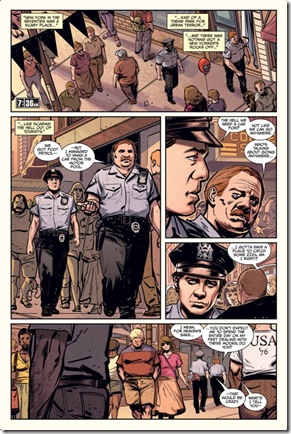 Trying to depict an earlier version of the actor Bruce Willis as John McClane with more hair and less wrinkles is no small task.  Thompson’s depiction of McClane in many places looks like someone else entirely and doesn’t resemble Willis closely enough.  Yet there are several panels scattered throughout the first story arc where he seems to capture the look perfectly.

As a narrative device, Chaykin’s use of the captions really helps to convey a lot of background information as well as insights into the character’s motivations and philosophies.  It seemed a little confusing at first, as if different voices were speaking, until I realized that the rose-colored backgrounds were narrative captions and the yellow backgrounds were McClane’s thoughts and observations.

There are great moments of insight, drama, comedy, and McClane’s smart-aleck wit and worldview throughout every issue.  The story also helps move his character along in a very well-thought out (by Chaykin) natural, progressive fashion.  As a result of his trademark gutsy bravado and acting on instincts McClane comes out on top (except he doesn’t get everything he wants), being promoted to detective third grade at the end of the story.  Based on the cover art I’ve seen, it looks like the second story arc of DIE HARD: YEAR ONE will cover some of his early days in that role. 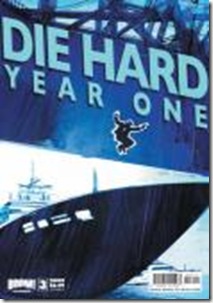 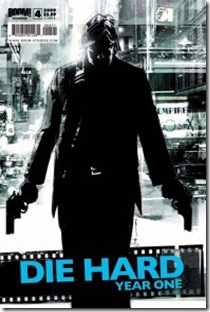 The covers for this series are also exceptional.  There are no less than 12 different covers across the short 4-issue first story arc.  Many of them are movie poster quality (including stylistic logos).  My favorite covers are Issue #1 and #2 by Dave Johnson, and Issue #3 and #4 by Jock.

This review originally appeared on the Captain Blue Hen website.