Comics I Read: Catching Up #27


There’s a few conventions of comics that don’t really withstand scrutiny — like “Secret Identities”, but that’s because seldom do comics underline just how…stupid they are. But, it is double-underlined here, then highlighted with an orange highlighter pen. “Gasp, you mean Green Arrow is ex-Mayor Oliver Queen? Wha-?!?”…Then there is the whole trial/verdict thing which was just unbelievably bad — “I’m tempted to overrule the jury, but, ah, what the hell, let’s just banish you.” How is that even remotely plausible anywhere anyhow?…“I saw part of me in Mia’s eyes”? Really, through the non-eye-showing mask? Really?…And the ending with Hal standing in for the JLA and saying, in essence, “we don’t care that you’re a murderer, since a biased jury let you off.”

Me again: I can't recommend this book, but the ending of "Brightest Day" #0 will make a little more sense if you read this ending first.

Brightest Day 0: It occurs to me that I wasn't sufficiently enthusiastic in my comments about "Blackest Night" #8. Geoff Johns went above and beyond adding a ton of new mythology and some great new characters to the DCU. 'Nuff said. Without giving away the ending of "Blackest Night" for those of you waiting for the collection, this issue follows the 12 characters that are highlighted at the end of BN #8. Boston Brand is the point-of-view character, as he tries to figure out what his purpose is, and the mystery of why these particular characters were chosen begins. It's a good start, and I'd like to be more specific so I'll probably wait to talk more about future issues until the BN collections ship.

Avengers vs. Atlas 1-4: I've switched to trades for most miniseries, but I'm supporting Marvel's effort to push the "Atlas" (no longer "Agents", apparently) characters. This is a good introduction for Avengers fans who haven't been following "Atlas" so far: Jeff Parker and Gabriel Hardman have crafted a really nice tale of the original Avengers having to put right something in time that Kang put wrong. The last chapter has some particularly touching scenes and some beautiful art. (Jason Aaron's "Gorilla Man" backup in #4 is also excellent.) My guess is that if you don't like this, you won't like the new "Atlas" ongoing either.

Action Comics 884-888: We're almost at the end of Greg Rucka's story of the new Kryptonian Nightwing and Flamebird, and though there's been good news on the Batwoman front, I worry about the fate of these characters when Rucka is done. They're clearly his babies, and I've enjoyed the year spent with them. It's hard to imagine JMS having any interest in them, and we already know that Paul Cornell's first arc (which I'm hugely looking forward to) will focus on Lex Luthor for 10 issues. Anyway, assuming it doesn't get screwed up at the end, this will be a good story to read in trades because it's connected to the "New Krypton" stuff but not consumed by it. 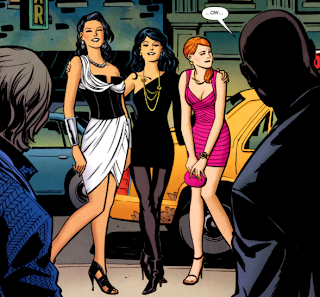 Brave and the Bold 32-33: I notice the covers now say "Lost stories of Yesterday, Today and Tomorrow" -- presumably so JMS can use whatever versions of the characters he wants. The Lovecraftian tale of Aquaman and the Demon in #32 is good, but Zatanna, Wonder Woman and Barbara Gordon Batgirl's night on the town in #33 is the first must-have issue since JMS took over. It seems like a frivolous bit of fun, which would be fine, but there's a whole other level to it. Cliff Chiang was the perfect choice for the art -- the body language and facial expressions of the women are brilliant. (Just ignore the couple of panels where a reflection of Zatanna in a window makes her look about 50 feet tall.)