By Shane - January 04, 2010
I wasn't actually a huge fan of Robert Kirkman when I first started reading his books.  He was competent, sure, but I didn't see the appeal--The Irredeemable Ant-Man was a boring side story in the middle of Civil War and The Initiative (although I've since changed my mind about this), and his Ultimate X-Men run was, in many places, a mixed bag (although I did very much enjoy his "Phoenix?" storyline).  And Marvel Zombies just seemed like a ridiculous idea--not that I bothered to try it at the time.

Now, though?  I've completely reevaluated my opinion on his work, and when his name is attached to a project, I'm far more likely to give it a look.  I don't know if I'd classify him as a master storyteller or a comics icon--but he's very skilled, he has an incredible knack for dialog, and he writes stories that, no matter how ridiculous, seem real.  In a medium where characters frequently violate the rules of physics, that's not always an easy feat.

Invincible is one of the few new superhero characters that continues to grow in popularity.  There were those in the Golden Age, those in the Silver Age, those in the Bronze Age, and even several characters from the first half of the 90's--once you got past that, though, the odds for success dropped severely.  That didn't stop Robert Kirkman, though, and he launched this comic as an ongoing series seven years ago.  Sales were rocky at first, but quickly stabilized--and then grew.  And grew.  And now it's one of the top-selling ongoing superhero books that isn't published by DC or Marvel, beaten only by The Boys and Kirkman's own recent launch, Haunt.

I'm sure that many of you know the "twist" to Invincible, but I'll keep it simple for those that don't--Mark Brooks is a teenager, a high school/college student, whose father is Omni-Man, Earth's greatest protector, a visitor from another world.  Basically, Superman.  When Mark finally begins to develop his powers, he takes on a superhero identity--Invincible--meeting the many other heroes in his world.  But even though he's incredibly powerful with only a fraction of his father's powers, he's not flawless--and it's something that only becomes all too clear when the "twist" really sets in.

The book continues from there, dealing with Invincible's family life, his friends, his superhero allies, his "villains" (many of them incredibly laughable), and his adventures.  Although he's the main character, he's not the only focus--the other characters in his world get plenty of attention, and it never feels like pointless filler.  It's a true soap opera comic in the Lee/Ditko tradition, with many of the same notes that made Spider-Man so successful.  Invincible has the potential to be that hero for this generation, and based on the quality of the title, he deserves our support.

It's worth noting that Kirkman also recognizes the attention Invincible has been receiving, and offers several different formats for the collected editions.  The standard trades are nice, of course, but my format of choice is the Ultimate Collection hardcovers--giant, oversized books that collect a full year of the title, with tons of extras.  Five volumes have been published so far, and the "twist" I'm referencing is revealed halfway through the first one (which would either be at the end of the first standard trade or at the beginning of the second), defining the title from then on. 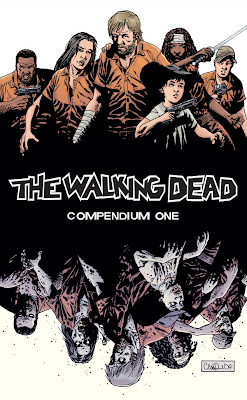 This was another book that I was reluctant to try.  In fact, when I first learned about it, I think I exclaimed "What, is this the only thing that Kirkman can write--zombies?"  What a pointless book, I thought.  A waste of paper and shelf space.

The Walking Dead is one of my favorite books currently being published.  Almost all of the human race has been transformed into the undead, with no explanation given as to why, and the survivors are forced to band together.  Standard horror fare, right?

What makes this book different, however, is that the zombies are not the antagonists.  Not really.  They're the background, the scenery--just noise that occasionally drives the story.  The characters even recognize that eventually, treating the zombies like a nuisance.  Sure, they'll kill you if they get their hands on you, and as a group they can be a deadly force of nature--but if you don't panic, if you keep your distance, if you don't screw up, you're fine.

No, the real threat--the real reason to read this book--is everyone else.  The human cast.  In this world, without laws, where the only goal is to survive another day, anything can happen.  Nobody is safe.  You may fall in love with a character, and in the next issue, they might die.  Or go insane.  Or run off.  The pressures that they feel are so accurately conveyed to the reader, and even though none of us have (hopefully) lived in a world filled with zombies, Kirkman and Charlie Adlard (and original artist, Tony Moore) so accurately convey the feeling of that world.

Seventy issues in, and the title still feels fresh, constantly changing.  Kirkman may be making this all up as he goes along, but it doesn't matter--you'll be on the edge of your seat with every issue.

As with Invincible, there are several ways to read The Walking Dead, but the most convenient way is with the compendium.  It collects the first forty-eight issues, and costs only $59.99--less than $40 on Amazon, and even cheaper in some other places.  And despite this price, the quality of the pages remains strong--actually, stronger than plenty of other trades I've seen.  This is how I was introduced to the title, and I devoured those first forty-eight issues in a weekend.  And after I was done?  I immediately wanted more, and moved straight onto trades nine, ten and--soon--eleven. 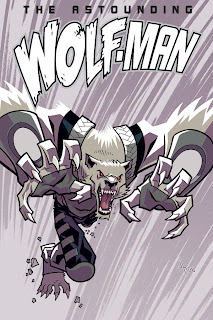 I don't actually have as much to say about The Astounding Wolf-Man, however.  It's a good title, and an enjoyable read--but of these three titles, the weakest.  I'm not really sure why, but if I had to guess, I'd say that it was because there's not too much to identify with in the main character, other than the sense of being thrown into a situation you can't control.  Except then he learns to control it.  So that doesn't even really count.

Don't get me wrong--I'm gladly buying the trades, and am interested in seeing how it ends--but if I had to give somebody a Kirkman book to sample, it wouldn't be this one.

The Astounding Wolf-Man walks an interesting line between superhero and horror.  The book is flat-out set in the same "universe" as Invincible and most other Image books, even having a crossover with Kirkman's signature book, but deals with werewolves, vampires, and magic.  The experiment is interesting, but I can't help but wonder if it leads to my relative apathy towards the title--if it doesn't have a clear identity, if it tries too hard to straddle these two different genres, why should I feel a connection to it?

The title is only collected in standard trades, although with the upcoming conclusion, I wouldn't be too surprised if an omnibus comes out that collects the entire run.  I'm also very curious as to where Kirkman and artist Jason Howard go next--I think that they've teased another collaboration, but I'm not positive.