I haven’t read every single story arc and graphic novel featuring John Constantine, The Hellblazer .  But I have read enough to believe that I have an appreciation for the character and a fair idea of what makes him tick.   If I was making a recommendation to a new reader and could only suggest one book or story, then I’m confident that HELLBLAZER: PANDEMONIUM would serve as a  great example of what John Constantine is all about.   Anything and everything that defines him is included in this original graphic novel, scheduled to be published in February 2010 in a hardcover edition.

There’s still time to get this included in your February Previews order. If you are a collector of Hellblazer this is essential.  If you enjoy the occasional reading of John Constantine’s exploits you will want to get this.  If you’ve been curious and will be reading about him for the very first time then this is a great jumping-on point.  And, I hesitate on this last one because I just can’t imagine anyone reading this review who has never read a Vertigo title before - - - if you are a Vertigo virgin then this is the one you give it up for.

In addition, there are several anniversaries coming up that make this title significant as well. 2010 marks the 25th year of publishing the adventures of John Constantine, who was first introduced as a secondary character in Alan Moore’s SWAMP THING #37 (June 1985).  HELLBLAZER is also the longest continuously published title in Vertigo’s history, and was their first or “flagship” title when the Vertigo line of mature books was originally introduced - - so it became a “trailblazer” of sorts. 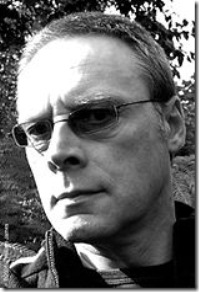 HELLBLAZER: PANDEMONIUM is written by Jamie Delano, who returns to the character after a lengthy absence.  While there have been many quality writers to pen his stories, Delano was the very first writer of Constantine’s monthly book and was hand-picked for the assignment by Alan Moore.  He scripted 36 of the first 40 issues of HELLBLAZER and fleshed out and developed the character, expanding upon Moore’s concept of a “blue collar warlock” from a working class background complete with street smarts and a foul mouth.  This occult detective was intended to stand apart from your everyday standard wizard and mystic and rely more on his cunning and deception, often in lieu of magic.   Delano gave him background, morals (but not too many), values and principles, and issues galore to haunt his daydreams.  He fully developed “J.C.”  into the chain-smoking, cynical and manipulative character with a dash of charisma that his fictional reputation is built upon.

I read an advance review copy of PANDEMONIUM,  a gripping narrative that finds Constantine exposing  a demon’s handiwork on the sidelines of the Iraq battlegrounds.  How he came to be there, what happens to him, and how he saves the day and later gets some payback make up a very engaging storyline that will keep you reading.  I liked this enough to give it a second and third read, and I’ll eventually order a copy of the hardcover for placement on my “keeper” shelf.  The following paragraphs contain a summary of what occurs.  If you prefer to be surprised, just skip to the latter part of this review . . . . .

The story begins on the bloody streets in Iraq where a car-bomber is apprehended and taken to a “detention center” . His presence there causes fatalities to interrogators or any soldiers unfortunate enough to be in the same room with him.

Back in London, John Constantine has become a shut-in, sequestering himself in an absent friend’s flat and trying to cover his expenses through late night online gambling. After a mysterious and foretelling wet dream brings him out of his stupor, he wanders out to clear his head.   While riding the subway a mysterious yet provocative Muslim woman wearing the traditional concealing black robes catches his attention.  He follows her trail to the British museum of history and they later depart to a nearby coffeehouse.  When an explosion close by causes panic, Constantine arranges for a cab to get her away from the area, considering that she would be a natural suspect.  He lingers at her apartment hoping for a romantic encounter only to succumb to the spiked tea she offers. When he awakes, he is alone with a missing museum artifact as the police break in and arrest him on suspicion of conspiring with a terrorist.

Obviously he’s been set up by the Muslim woman,  Aseera Al-Aswari, who appears to be much more than just a post-graduate student of Archaeology from Baghdad University.  To avoid prosecution, Constantine is coerced into working for the government, providing his expert assistance as a special interrogator in Iraq.   While there, he learns that Aseera has also been coerced into cooperating with the British Security Service, helping them bait Constantine in exchange for release of her guerilla medic brother.

During the questioning of the feral prisoner, Constantine learns that he’s a Djinn, released from his “bottle/lamp” and now in service to one of the ruling class elite  of Hell itself.  Complications lead to the prisoner escaping and during the chaos that ensues John and Aseera obtain their immigration papers to hell courtesy of gun-wielding terrorists.  John bargains for their freedom by challenging the lead demons to a game of “war”, a game he’s never played before and doesn’t understand the rules of.  But it’s close enough to high stakes poker for Constantine to bid and bluff his way through.

His wits and cunning serve him well once again, and John obtains a very satisfying and amusing “payback” in the final pages of the book.

The art by Jock (aka Mark Simpson) is first-class.  His style will remind you of Alex Maleev, and is very well-suited to this material.  I haven’t seen his work on a book (aside from cover art) since DC’s THE LOSERS with Andy Diggle some years ago.  His work on that title helped to define the setting and maintain a feeling of modern-day espionage.  It’s equally inspired and  attention-getting  in PANDEMONIUM,  and suited to the gritty and grim nature of the activities here.   The preview copy I reviewed was an unedited and abbreviated galley, so the art was not necessarily fully completed. But I can tell that it will be extremely worth a look, and will certainly enhance the story.  The hardcover will be in full color.  This preview is mostly black and white, with just a little color added in the opening pages.  But what I see here is a good indicator, as the subtle shades of orange, gold, gray and brown used throughout will further help depict the bleak setting of modern day Iraq. 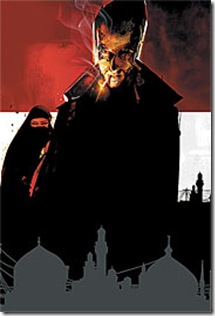 It’s definitely the story, plus the dialogue and narration, that keep me returning.  PANDEMONIUM has a lot going for it as a straight-up action /horror story. But for those who crave a little extra, there are plenty of  philosophical asides, implied commentary and symbolism to keep you coming back.  After several readings, I continue to pull out new revelations, insights and amusements. Delano is a true craftsman and carefully chooses his words.   He won’t hit you over the head with a preachy message, but if you seek a thoughtful commentary on modern-day war and terror, it’s interlaced throughout this book.  Well done, indeed.

The captions on the opening pages, the shared thoughts of an unknown narrator, perfectly set the tone for the story to come and bookmark the appropriate setting, Iraq:  “This ground is fertile, well watered by the twin rivers of hate and fear.”   . . . . . “Now, ripened under the blazing eye of terror, my crop stands ready for the reapers.    And their flashing scythes.” . . . . .   as the first page shows a street scene just as a car bomb explodes, and then in the ensuing death and devastation on the next page the captions detail further . .  . . . “Then one by one fall silent as I move among them . . . Harvesting each tiny grain of life to swell the granaries of Kutha.”

There are such gems throughout. Like the description of night life in Baghdad given up by Constantine as he observes from his hotel window and begins to drink to mute the tension:  “Outside in old Baghdad, gunshot jazz.  Ragged rim-shots rattling off the taut skin of night.”  . . . . . “I’m drunk.  I should sleep. But I’m wired awake, fevered heart caught up in syncopated palpitation.”

There’s a final and welcome bonus in the back pages - - The John Constantine Hellblazer Reader’s Guide - - a chronological listing of the various trade editions collecting the Hellblazer issues in proper order. (Not a single one of the trade paperbacks have volume numbers printed on them).    Let’s see  . . . . if I want to read the early works by Delano I’ve going to have to obtain at least 5 of the 30 titles listed here.  Please save me.