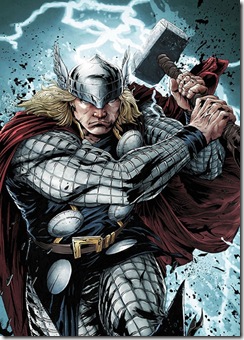 Let’s take a pause now from the blackest of nights, and darker reigns and sieges to reflect on a “sleeper” title.  You know what I mean.  Some books don’t generate a lot of buzz but just go about their business and remain consistently good and interesting month after month.

Ten years ago for me that book was THOR (Volume 2) under the capable hands of scripter Dan Jurgens and a revolving stable of artists including Kubert Jr., Romita Jr., Raney, Starlin and Immonen.

Usually an ever-changing artist assignment on a book spells trouble for the scripter and maybe for the title as well.  (Of course, revolving writers is an even surer way to kiss it goodbye.)  With Jurgens on THOR it didn’t matter.  He seemed able to perfectly describe what he wanted and evoke the best images from the artist no matter who he was working with.  Jurgens also put his own personal stamp on the title, and set his work apart from but equal to the best stories from Lee and Simonson on Volume 1. 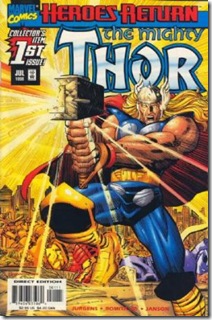 8 through 2004, for 79 issues Jurgens entertained and surprised month after month.  Just when you thought he was out of ideas, he put a new spin on events.  And finally after he told all the stories he wanted with THOR, he left the title.  Oeming picked up the scripting duties but couldn’t measure up to the grandeur of Jurgens, and THOR was discontinued after six more issues.

Now here we are in the next decade, and the book from Marvel that I consider the current “sleeper” title that deserves more praise is . . . . . THOR Volume 3.  Same character, new situations.  Writer J. Michael Straczynski has successfully restored the glory, the power, and the majesty to Norse mythology with a modern-day spin by placing his center of activity (Asgard) smack dab on planet Earth.  Go back and read the first story arc and it feels like learning about legendary gods for the first time, and the sense of wonder returns.  And, JMS also knows his way around a storyboard and brings out the best as well of his two artists to date, Copiel and Djurdejevic.  The art is gorgeous.

Sadly, his run on the title is much shorter than Jurgens was.  JMS has left, and I suspect before telling all the THOR stories he had planned.  Hopefully history will not repeat itself and this title will continue to sell well beyond the following six issues it lasted with Volume 2.  At least it’s planned for longer than that.  There’s an interim writer for six issues beginning with THOR #604.  Then Matt Fraction scripts the Free Comic Book Day THOR/IRON MAN one-shot in May before taking over regular THOR writing chores with #610.

Some comic buyers upon learning that news will opt out of purchasing the next six issues upon the assumption that nothing will happen.  That would be a Frost Giant-sized mistake.  For one, JMS left a very significant plot thread dangling and the new writer is finishing that story.  The other reason is that the new writer, Kieron Gillen, is doing such a fantastic job with the two issues that I’ve read so far (#604, #605) that he deserves some support and recognition and I urge you to check the current THOR issues out for yourself.

What’s going on in those issues?  Well, I don’t want to be a spoiler so I’ll tell you just enough to whet your appetite but not ruin your dinner. 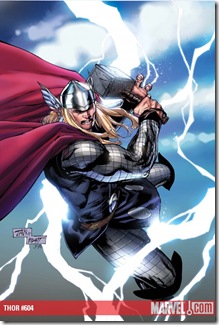 If you want to experience for yourself just how smooth the transition is from Straczynski to Gillen then pick up GIANT-SIZE THOR FINALE (Marvel one-shot), the last book scripted by JMS and penciled by Marko Djurdjevic.  If you can’t find it don’t worry - - - you can still pick up the story thanks to the opening page summaries on the following issues.

Thor has been exiled from the Oklahoma Asgard thanks to Loki’s manipulations, and spends his days mostly in the form of Dr. Don Blake and in the company of The Warriors Three and Sif (Volstaag is operating a diner!)  Balder has been appointed king/ruler of Asgard and is persuaded by the scheming Loki to move Asgard to Latveria in Dr. Doom’s territory.

Doom and Loki are abducting Asgardians, who become guinea pigs in Doom’s mad experiments.  A mortal man, Bill, finds out but is stabbed by Loki’s allies.  Before he dies he tells Balder what he learned.  I love the use of shadows in Djurdjevic’s art, and the action panels explode from the page.  He’s not shy about showing blood.

The new team picks up the story in THOR #604 and I am amazed by the detail and added features of Billy Tan’s art, almost reason enough to get this book.  There’s a violent storm going on in the opening pages, and the highlighted art won’t let you forget it.

In a mad rage Billy’s lover, the goddess Kelda, confronts Doom at his fortress and becomes yet another victim of his power-draining experiments.  We learn that the Norse gods, while powerful and immortal, can lose both of those traits.  This is the Dr. Doom that I prefer.  Sure, I’ve enjoyed some of the stories where he actually does the right thing and becomes a temporary ally of the Fantastic Four and others.  But when he shows his true nature, that of a supremely confident and ruthless tyrant without morals is when I hate him the most and love him the best.  He’s a classic villain.  And we get Loki as well in the same story?  Bonus!  (No bias here, but I like him much better as the scheming, manipulative back-stabbing male that I’m used to reading about).

Balder declares war on Doom and sends out the call to arms.  They are confronted by some morphed Asgardians, turned into cyborg-like killing machines at the hands of Doom.  The settings in this story are wonderfully depicted and the new guy Gillen gets the dialogue just right and conveys the feel of being in the presence of immortal gods.  Nice touch. 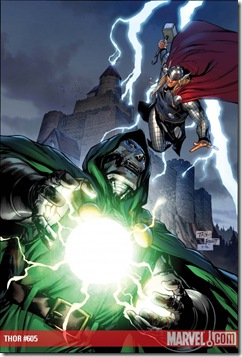 In THOR #605, the mighty Thor shows up in a battle rage.  This story concludes in the next issue of THOR  (#606), not on the stands until February.  In the concluding pages of #605, Dr. Doom’s version of The Destroyer begins to beat on Thor.  Dare we ask who/what is the power source?

This is a fast and furious read that has captivated my attention.  Gillen has stepped in and not missed a step.  I’m impressed with his writing, and may have to seek out his other  Marvel work  (the ARES Dark Reign mini-series, etc.)    I only know of him from reading the first PHONOGRAM trade from Image thanks to Shane’s sharing.  He also handled the subject of gods there, but they were of his own creation and very well done with some neat twists.  (Real gods, or the imagination of the supposedly main character?)

I recognize that Gillen is finishing off a story as plotted by JMS but he pulls it off nicely.  I’m interested in seeing what he does in his final three issues where the scripting may be solely his creation.
Get thee to a comic shoppe and see for thy self.