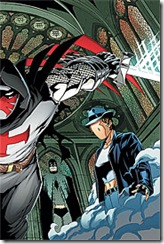 The re-introduction of Azrael that began in BATMAN ANNUAL #27 continues here before moving on to the regular AZRAEL monthly title.  The cover of this issue joins with the BATMAN ANNUAL cover to form a great widescreen panel featuring Azrael at front and center and flanked by stain glass window images of Batman.

I love Tom Mandrake’s work here, particularly his two-page panel of The Question hurdling over the top of the mind-controlled crowd guarding the entrance to the underground bunker. It’s where the La Saligia cult is endeavoring to complete the sacrificial ceremony that will undo the Catholic Church and revive their new savior.

Batman and Robin join forces with the new Azrael to prevent this event, and they end up recruiting The Question as well in this issue.  By the end of the issue it becomes clear that the alliance with Azrael will be short-lived as he refuses to be judged by Batman because “that’s reserved for a higher power.”  A decent story by Nicieza - -  but it was the art that kept my interest level high and enticed me to keep going.

More developments add to some confusion here as Barbara Gordon enlists the “good vampire” Looker to help and learns that the “Stygian” vampire impersonator had visited her during the night.  He may be stalking her and we learn there is a connection to Barbara (makes sense if my suspicions are correct).  The Stygian created a fantasy from Greek words and blood/death mythos and this helps to guess at his next moves. During an ambush and battle with The Looker the villain escapes as the story ends while we learn “he’s only going to get more dangerous”.  Not very satisfying. Obviously, this story will continue - - but where isn’t made known just yet. 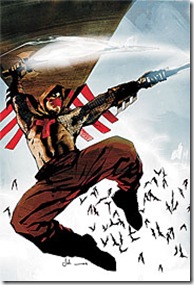 Ramon Bachs does a real nice job on the art here, especially the action / fight scenes with the new Azrael.  Wish I could compliment Nicieza.  He muddies things up with his story-telling style, which is distracting when he jumps the story line back and forth between present and past without any good reason.

What I think is happening here is that there is yet another vigilante who is offing some church members, presumably for past crimes against humanity. So Azrael gets called to track him down, but gets side-tracked by a confrontation with his girlfriend (or ex-wife?) about his mysterious new job and she refers to past incidents that are seemingly important but haven’t been revealed in the story anywhere.

Then Azrael in his regular Michael Lane attire meets the vigilante assassin at the airport and ends up letting him go since their motives are similar. Then we later see a crime scene investigation at a church where apparently Azrael was severely beaten and crucified and the detective calls it a “suicide”.  How could he tie himself to the cross?  I don’t have the patience for this!!  It’s exactly the type of frustrating sloppy story-telling that has made me stay away from Nicieza’s works in the past.  One and done for me. 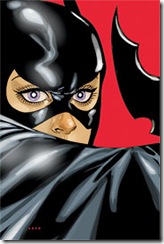 Lee Garbett gets an assist on the art this issue with Trevor Scott and Sandra Hope and the results are spectacular.   Combine that with some first-class coloring from Guy Major and this becomes a very good looking book.  It’s my favorite issue so far.

The new Batgirl meets her toughest challenger so far when she faces off with a condescending Scarecrow and wipes the smirk off his stitched face mask.  And, after some quick struggles that test their relationship, Stephanie and Barbara Gordon finally bond together to form a working partnership with each appreciating the others qualities.   It’s a very neat beginning for this title and I see good things ahead.  Keep your eye on this one. 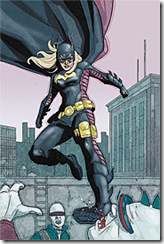 Writer Bryan Q. Miller seems to have found the right balance of story, action and character development/insight to make this book more than just a fun, light-hearted reading - - he quietly adds details and lessons without a lot of fanfare, and makes it memorable enough to stay with you.  I think it’s a great book for adolescents to read - - they should really empathize with Stephanie and find inspiration from her story.  Miller also adds some funny wisecracks / responses from Batgirl, just enough to amuse and not make you weary of them.

Lee Garbett gets another assist on the art, this time from Tim Levins and the results are also premium quality.  I don’t remember any other works from these various artists but they are all making a  favorable impression on me.  This is my second favorite issue in this series for art, after Batgirl #3.

This is a stand-alone story where the new Batgirl costume gets a field test.  It appears to be an amalgam of the designs and colors of both former Batgirl costumes and Spoiler/Huntress garb.  Barbara Gordon has added some enhancements to improve Batgirl’s defenses as well as make it simple for Oracle to follow her every movement and provide assistance.   Batgirl fights a Superman foe, Livewire, and discovers some neat features of her new costume.

This looks to be a good dropping-off point (just temporary) for me, as I think these first four issues will most likely comprise the first trade paperback.  I’m going to sit back and wait for that second trade in another six months and check back on the Batgirl.  Hopefully, someone else from our group is reading this title and can keep us up to date on current events. 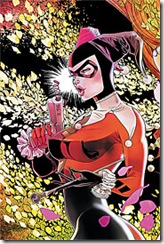 The artist on this book really seems to be getting comfortable and starting to stretch out and enhance his work with a little experimentation.  I see lots of skinny narrow panels, both vertical and widescreen, put to very good use here.  There is also a full page overlay of the Joker that appears as if he is leaning backwards into the other panels that looks really neat.   I also appreciate the perfection that human anatomy is capable of, and the three Sirens as drawn by March are simply gorgeous.  It’s definitely the artwork that keeps bringing me back to this title (and not just the women, for those of you who are thinking I’m a dirty old man).

I wish I could compliment the work of Paul Dini the same way.  It seems as if he is floundering around with the scripts, trying to find his way with this book and make it meaningful.  I admit that it does present a challenge, and if he suddenly started to make it more serious or link it to the high-drama events in the other Bat-books there would probably be a critical backlash.

The story continues from last issue, where the Joker blimp crashed into the Sirens HQ.   For those of us who were thinking the Joker as portrayed here is a sad return to the silly, slapstick gimmicks and actions of old-school Joker we learn the reason for that.   I’m glad that I don’t remember Gagsworth A. Gagsworthy.  The jealousy that drives his killer urges seems a  little  meaningless since Joker and Harley Quinn are no longer an item.    If I come back to this title next issue it won’t be because I want to see how he is defeated - -  it’ll be to sample the great art one more time.