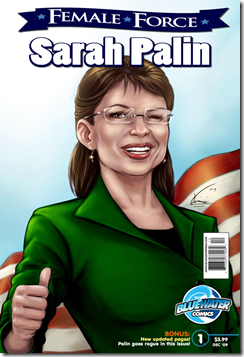 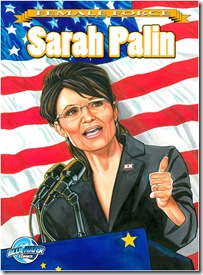 Bluewater Productions has announced that they are scheduling a fourth printing for the FEMALE FORCE issue featuring SARAH PALIN and adding new content.   The latest edition will be entitled FEMALE FORCE: SARAH PALIN - GOING ROGUE EDITION and includes new artwork, a new cover and updated material since the first printing.    The story in the first printing ends when the McCain/Palin ticket fails to make it to the White House in the November 2008 Presidential Election.  There’s plenty of new material to add to the fourth edition = her resignation as governor of Alaska, her best-selling autobiography, and clashes with the young father of her daughter’s baby.

Bluewater Productions, who I’m thinking of awarding the 2009 “Little Company That Could” trophy to,  has obtained a plethora of media attention from television news, magazines and newspapers for their FEMALE FORCE and POLITICAL POWER series of comics.

While I’m no fan of Sarah Palin, I agree that’s there no denying her impact and influence on the current political scene.  My hat is off to Bluewater for being so media savvy and alert enough to capitalize on these trends and thereby draw more attention to their products.   The end result is it brings more attention to our hobby (and maybe creates some new readers) and also may help a small company like Bluewater  keep their head above water (I just couldn’t resist that!)  hopefully bringing them enough capital to continue producing new and innovative graphic works.  The mission of the FEMALE FORCE series is to focus on women who are influencing and shaping modern history and culture, including politics and entertainment.  This seems very much in line with working towards those goals.  Nice going, folks.

I’ve been reading this independent music (mostly) magazine since it’s early beginnings. The stated mission of Paste is to cover “signs of life in music, film and culture” and they do that very well.  Now they appear to be paying attention to comics as well, at least for the very first time and on their frequently-visited website.  Follow this link to read about their picks for the twenty best graphic novels of the decade  (2000-2009).  The selections were made by Sean Edgar and Gib Bickel. 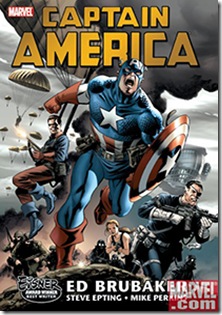 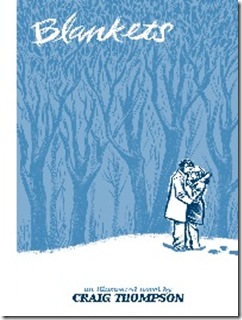 It begins with Ed Brubaker’s CAPTAIN AMERICA at the #20 position and wraps up with BLANKETS at #1.  In between there are many works very familiar to us “fans” as well as some surprises.  Some of these titles I need to explore further. Thanks for that, Paste magazine!   I have no quibbles with this list.  It’s very well thought out and inclusive of all types of comics from spandex opera to real world drama, from the big two to the indies.

UNDER THE RADAR - - - MUSIC AND COMICS

Furthermore,  Paste magazine isn’t the only music publication to cover comics.  For more than a year now UNDER THE RADAR, a great magazine from California, has been regularly 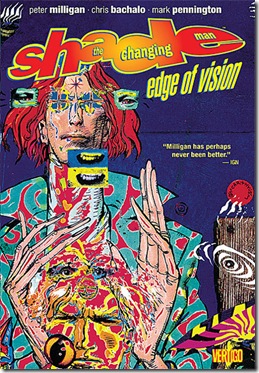 writing about and reviewing comics in its pages.  The editor is a fan of this literary format and always includes some carefully written reviews every issue.  It’s worth your checking out - - I’m a regular subscriber.  And they also publish web-exclusive comics reviews.  Here’s a link to the latest one . . . . .

Don’t you just love that others are recognizing what we’ve known for years – - - this is a great American art form.