The Legion of Super-Heroes - Part One

I didn't always.  My first exposure to them came from an issue of Superboy--issue 45, I believe?--where they showed up in Hawaii to take back the flight ring that he gave to his surrogate sister, Roxy.  From there, I was lucky to see even one or two appearances from the characters--maybe a reference here or there in a crossover--until the Teen Titans issue that rebooted the Legion for a second time.  I started picking up the book after that, and quickly fell in love--and then I went back and fell in love even more.

Despite the fact that I didn't start reading the book regularly until the Waid/Kitson relaunch, my favorite Legion has been, and quite possibly will always be, the post-Zero Hour crowd, complete with updated names (Livewire, Apparition, Triad, Umbra) and new characters (XS, Gates, Kinetix, Shikari).  Nostalgia can be powerful, and this was the first Legion I was ever introduced to--for me, these are the iconic versions that I read about as a child, even if only for one issue.

But really, I'm getting ahead of myself.

For no reason in particular, I'm going to begin a...retrospective, I guess?...of the various points in Legion history, as I reread through them.  This will take awhile, but it's good to have a long-term project!  Even one as pointless as this.  But hopefully, this should allow me to put together my thoughts about what makes each period in Legion history unique (and I do think that they're all unique), and maybe even allow me to get even more enthused about Paul Levitz's upcoming return to the title (well, it's Adventure Comics, but really, the same thing at this point.)

To start with--the Archives.  I'll be honest--I haven't read all of them.  The first six, yes, but I'm still missing 9 and 11, and I never began reading 7.  I think I got sidetracked, and when I returned I skipped ahead to the single issues.  I'll do my best to analyze this, though. 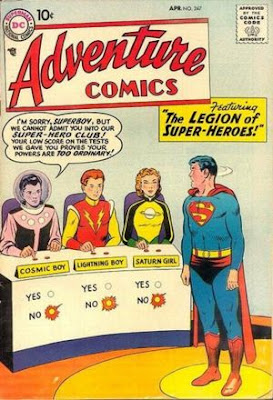 The first thing to note--the Legion changed a lot in the early periods.  Names, origins, powers, and more--it was very clearly in flux.  At one point, the Legion was portrayed as...ancestors?  Descendents? to the group that originally met Superboy.  This was a retcon that didn't stick, obviously, and before long the Legion eventually stabilized.  To be fair--these were auxiliary characters at the time, and nobody ever expected them to become one of DC's leading franchises.  The writers were trying to meet fan demand--there was no consistent direction.  As the Legion became recurring, however, this changed.

There were a few regular writers early on (Jerry Siegel, Edward Hamilton, Otto Binder), but as was the style at the time, they were there mostly to just keep the books moving, not to really bring their own vision to the book.  Despite this, though, they broke ground even early on--the Death of Lightning Lad was a powerful and shocking story.  A founding member of the Legion, killed in action?  And not immediately returned to life at the close of the issue?  Marvel (as we know it today) was still in its early stages of development--death and real change wasn't something readers were used to in their comics.  This was the first real sign that the Legion wouldn't just trod along--there was something about the concept that let writers make waves.  Another early sign was the death of Triplicate Girl--well, one form of her, at least, changing her into Duo Damsel.  Again, the main character didn't stay dead--but she had to deal with the trauma, and she was changed.  This was still something of a phenomenon.

It wasn't until Jim Shooter joined the title, though, that things really began to move.  Siegel, Hamilton, Binder and the others had developed characters and concepts for the Legion, sure, but Shooter was the writer that really brought everything together.  Everyone already knows his story, so I won't go into that here--but I will say that, as much as he changed the Legion, he changed the industry more.  His tenure over Marvel led to so many incredible developments that we take for granted today--if it wasn't for that young, fourteen-year-old boy taking a chance and submitting a comic to DC, we would have a very different industry today.

Those early stories by Jim Shooter still hold up remarkably well.  They're dated, of course, but not nearly as much as other Silver Age stories--and they're not nearly as corny, either.  Shooter was one of the first cases of a fan taking over a title, and he took it seriously--and the Legion became serious, as well.  Generic, goofy stories vanished, and we got our first real taste at a regular continuity, and even a few subplots.  It wasn't a complete change--editorial at DC still required that titles be self-contained and available to every possible reader, so none of this could be overt, but Shooter worked it in anyway. 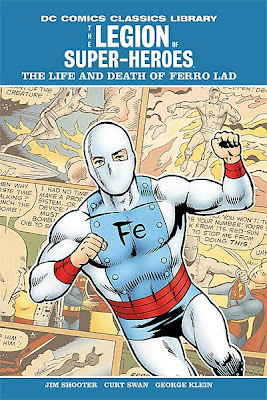 As I mentioned before, Legionnaires had died or been injured before--but they eventually returned to at least some semblance of the status quo.  In one of Shooter's early stories, however, he killed off a Legionnaire--and he stayed dead.  For good.  The Death of Ferro Lad has been collected into DC's new "Classics" line of hardcovers, and for good reason--this was where the DC Universe started to change.  Again, Shooter's influence was incredible, even as a young boy.

In addition to killing off a Legionnaire and developing subplots, Shooter began to introduce new characters--characters that remain iconic Legionnaires to this day.  With his very first issue, he introduced Princess Projectra, Karate Kid, and even Ferro Lad, whose career would be short-lived.  But he recognized that the Legion had become "point and shoot" characters--there weren't many inventive uses of power, and he wanted to change that, to bring innovation to the battlescenes.

I have a tremendous respect for what Shooter did with the Legion in those early issues, as I'm sure you can tell.  He didn't stay on the title forever--editorial shakeups resulted in him leaving and the Legion becoming backup characters once again--but his work really set the stage for these characters to become a powerful franchise for DC.

There are very few concepts that have endured at DC, in one form or another, for so long--Superman, Batman, Wonder Woman, Green Lantern, Flash, Teen Titans, the JLA, and the Legion.  That's really it, right?  Sure, they'd occasionally take a small break or be relaunched, and maybe sales weren't always the best--but they've been present, in one form or another, for decades.  That's worth noting.

Next time, I'll take a look at Paul Levitz and his entire, legendary second run, including the Great Lightning Saga, all the way up to the end of the Magic Wars.  I haven't read all of this yet--I'm at some point after the Great Lightning Saga--so this won't be posted for awhile.  But eventually!  Remember, this is a long-term blog posting project, and it won't be the only thing I'm doing, so we've definitely got time.  But in the meantime, I'd love to hear your thoughts!  Go!