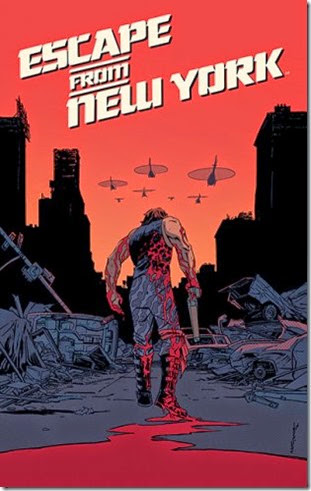 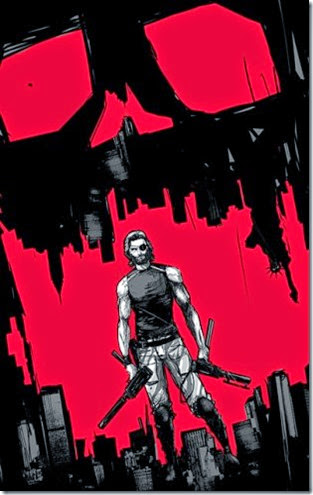 Reading Boom!’s ESCAPE FROM NEW YORK brought back fond B-movie memories and made me want to watch John Carpenter’s classic film one more time.  Alas,  my only copy was a VHS tape that I sold many years ago!

What made Carpenter’s film so memorable was iconic character Snake Plissken, so aptly portrayed by actor Kurt Russell.  That signature eye patch, swagger, and take-no-shit attitude made a real impression, just like a writhing snake tattoo might.  The film had style in capital letters. 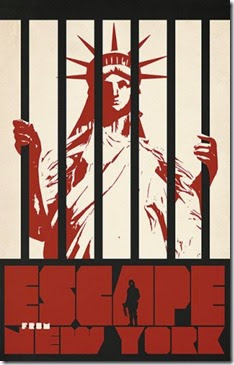 ESCAPE FROM NEW YORK the comic has that same style stamped all over it.  Writer Christopher Sebela seems to have studied the film very closely.  You will believe this is Snake Plissken. He talks and acts exactly the same.  Fans of the classic film will love this book.  Those who have heard of the legend of Snake Plissken, but perhaps are too young to have experienced it,  can read this book and find out what all the fuss is about.

The setting is near-future America, where the island of Manhattan has been fenced off and turned into a prison colony.  The film ended with Snake being pardoned by the President of the United States and then playing an embarrassing prank on the chief executive.  Issue #1 opens up with this same cassette-tape scenario.  However, in this version the action has real consequences.  It’s spoiled any chance of the USA brokering a peace and may lead to World War III.  The President immediately revokes the pardon, and brands Plissken a traitor. 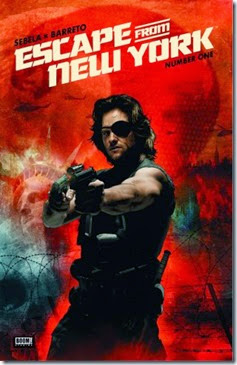 title, Plissken escapes and joins up with a team of rebels on their way to the separatist state of Florida, where individuals must enter and survive the Crucible to become a member. The story ends on a cliff-hanger.

Snake wise-cracks, talks back, and fights his way through the issue in his trademark style. Artist Barreto is not going to supplant any upper-tier stylists as your new favorite artist, but he is to comics art what B-movies are to entertainment. Very functional. He moves the action along and gets his moments to show what he’s capable of. The more you study the art the more satisfying it becomes.  One of my favorite panels occurs early in the story when Snake takes over a seat  formerly occupied by  a helicopter pilot.  Turn the page to find out what happens to the pilot.  There’s a lot of ESCAPE FROM NEW YORK in that panel.  There’s a lot of Snake Plissken’s imprint on that panel.  That panel has swagger.