Every so often, a new release comes out that catches everyone off guard.  Not many regular comics fans  pre-ordered a copy.  Comic shops didn’t order heavy, more likely they ordered light or not at all. Remember CHEW #1 from several years back?   I predict the combination of dynamic story and breath-taking art in SQUARRIORS is going to make it a sell-out once the word of mouth gets around.  What’s the best thing you can do with this information?  Get to your comic store tomorrow and pick up a copy.  Supporters of the Kickstarter fundraising campaign received an advance digital copy.  I’ve seen it and read it and it’s worth every penny.  Trust me on this one . . . . Pick it up!

The book opens with a scene inside a 1986 Illinois bar (catch the double meaning on the illuminated sign) with very few patrons.  The overhead television set plays a newscast that alludes to a disaster and warns of suspended emergency services due to a lack of law enforcement support.  Currency is worth nothing, and those wishing to obtain goods or services must have something of value to trade for it.  The violence inside the bar seems to indicate that society has collapsed and many have reverted to values more in line with berserker barbarians.

Flash forward ten years and it appears that only animals have survived (at least until 3/4 of the way through the issue), and species once at odds with each ot her or former predators and prey have banded together in order to eke out a living.

The story follows one such colony (or tribe), the Tin-Kin, comprised of various species of squirrel, fox, field mice, rabbit, chipmunk, groundhog and raven/crow.  Starvation is thinning the ranks of the Tin-Kin and the land they occupy does not provide enough food. They have to consider making peace and offer trade with a neighboring warlike tribe in order to survive. They discuss contacting  the Maw, until a small scouting party encounters a band of marauding Maw just south of their encampment.  War is more likely to occur.

The first issue covers a lot of ground and there are a multitude of characters to introduce, some of whom do not live until the end of the issue.  This is not a cutesy animal book, and the battle scenes are very brutal and bloody. It’s not clear who the main characters are just yet.  We only learn the the Tin-Kin are apparently the most peaceful and rational of the various colonies. 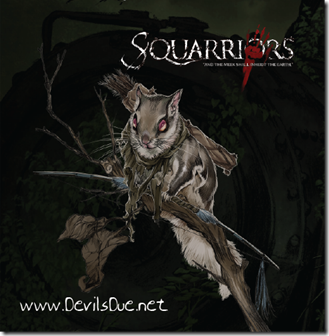 Even more intriguing than the story is the incredible illustrations.  Witter’s art is very detailed and photo-realistic. She is equally adept at depicting landscapes and scenery as the movements and nuances of each animal species. The emotions that play across the features of each animal are very easy to interpret thanks to her skills. The colors in use here are very bold and vibrant.

Issue #1 is rounded out with a quality guest artist gallery, afterword by writer Mazko, and a very useful guide to the various tribes and how they are organized. My favorite art page is by Corbyn S. Kern. It’s a great tribute to a classic Stanley Kubrick movie.

SQUARRIORS is a premium effort from the creative team.  I look forward to upcoming issues and anticipate that both story and art will get even better, elevating this book to a level that only a few achieve.