By Jeff Metzner - October 22, 2010
Black Widow 1-6: Marjorie Liu's first (and only) arc runs through the first five issues. It's a decent enough spy story with good characterization, but there's never really any doubt which side Natasha is on and the mechanism for raising that doubt -- she's collecting intel on her friends! -- has been done before with Black Panther and Batman. The first part of Duane Swierczynski's story in #6 was more to my liking, throwing us into the middle of an already exciting story and giving us a few pages to wonder about which character is Natasha and the rest of the issue to wonder what she's up to. So far "Hawkeye & Mockingbird" is the far superior Marvel spy book, but at least this one is improving. 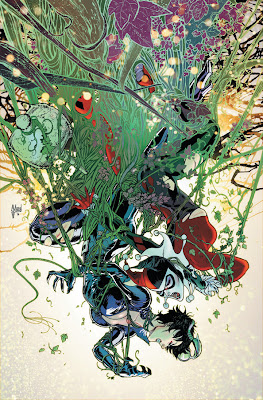 Gotham City Sirens 11-16: Paul Dini only wrote one of these last six issues (#11). I know he's busy with "Tower Prep" and "Ultimate Spider-Man" on TV, and that's fine -- I hear good things about "Tower Prep" but haven't seen it yet -- but given that this book was invented for him to write a character that he created and one that he revitalized, I wonder if it needs to exist if Dini's not going to be able to do it. It's not like there aren't a bunch of other Bat-books around with well defined points of view, and this one is just drifting. That said, Tony Bedard's story of the return of Selina's sister in #12-13 is quite good, but I didn't care for his story in #14-15 because I don't think these characters are the type that should be involved with aliens. ("Salvation Run" notwithstanding.) The first part of Peter Calloway's story in #16 didn't do much for me. I don't understand how anyone would know that Selina knew who Batman was, and the story's too similar to what's going on with Vicki Vale in the other books. 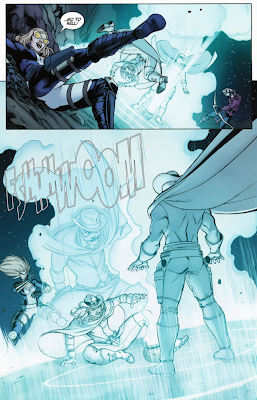 Hawkeye & Mockingbird 1-5: I agree wholeheartedly with what Shane had to say about this book. As writer Jim McCann describes it, "It's a spy book starring Avengers...and spies." The moments in the writing I'm most impressed with were an argument between Clint and Bobbi in #3 that easily could have been very cliché but wasn't, and the entire second half of #5 which seems to have a story climax every other page. Seriously, I kept thinking I was at the end of the issue and then something even more surprising would happen until the really shocking ending. I haven't talked much about art in this blog entry yet, but David Lopez is doing a wonderful job on this book. McCann's writing requires lots of emotional "acting" from the characters and Lopez nails it every time. (See the page above, the scenes between Hamilton Slade and his daughter in #5 and the shot of Hawkeye on the last page of that issue.) Now that Marvel's planning to cut back on the number of titles they publish, I'm not sure what the fate of this title will be after the "Widowmaker" crossover mini. It probably depends on sales, so please buy lots of copies so that we can continue to enjoy this book! [Edited to add: Here's another good review of H&M from Westfield Comics.)

McCann has proven himself a standout writer in another venue as well. I had the privilege of buying an advance copy of his "Return of the Dapper Men" graphic novel at NYCC and in my opinion it's a modern family classic. I'll have more to say when the book becomes widely available, but if you still can I urge you to preorder the book sight unseen. (Or check out the trailer on YouTube.) In fact, if you get it and don't think it's terrific I'll buy it from you. (This is a sincere offer, but it's only open to people I already know personally. Sorry, random Internet folks!)


Power Girl 14-17: The tone is definitely different from the whimsy of the Palmiotti/Conner issues, but Judd Winick is doing a great job mixing humor and adventure (and an unobtrusive tie-in to "Generation Lost"). I was especially impressed with the disintegration of PG's secret identity in #16 and the Batman (Dick Grayson) appearance in #17. ("I swear to God, half the time it actually seems like he's having fun.")


Supergirl 53-57: As I said in the previous entry, the Bizarro story in these issues is the best that writer Sterling Gates and artist Jamal Igle have done so far. It follows up on elements of "New Krypton" and Geoff John's "Escape from Bizarro World", though you don't need to have read either to enjoy it. I'm not sure if Igle is done now or what: new artist Bernard Chang drew #57, and Igle's not listed to draw the annual. But if Chang's work on #57 is any indication, the art duties are in great hands. There are lots of scenes between Kara and Bizarrogirl articulated really well, and an entire modern Bizarro Justice League including a Firestorm that seems alarmed that his head is on fire! Really, a very well done story paying off a lot of what Gates has been working towards. It seems the only thing left to tie up is the Cat Grant storyline, and it looks like that is coming to a head next issue.


X-Men Legacy 238-240: Finally, with "Second Coming" over, Mike Carey is able to get back to the stated premise of the book: Rogue mentoring young mutants. The story of Indra's arranged marriage is very timely and clever, and the addition of Magneto to the cast really works well. ("Clearly I'm outnumbered here. Surrounded by your people...I welcome these things. They virtually guarantee that you'll underestimate me.") Throw in some excellent work by artist Clay Mann, the kids having to act on their own, and a surprise ending, and #240 turns out to be my favorite issue of Carey's entire run.

Young Allies 1-5: Unfortunately, this book is gone with #6. It had a different voice than "Avengers Academy" and "Young Avengers" and I'm sorry to see it go. (One wonders if the book would have sold better if they had made up an Avengers-related name for it.) At first Sean McKeever's "Bastards of Evil" story seemed too similar to what Paul Cornell did with the Young Masters in "Dark Reign: Young Avengers", but it soon became apparent that it was its own thing and I really enjoyed his spin on it. But McKeever will be back for "Onslaught: Unleashed" early next year, and Young Ally Rikki Barnes has been involved with Onslaught before so maybe these characters will be back then?

Zatanna 3-5: At least Dini's consistently writing this one. I'm still not entirely hooked on it yet -- Zee just doesn't carry the weight in the mystic world to me as, say, Dr. Fate, but that's how Dini's writing her -- but there's a nice moment with her (late) dad in #3 and the interactions with her cousin in #4-5 were good. The more "down to earth" (if you can say that about Vegas) story in #4-5 worked better for me. I do like the book, but it's not a "can't wait to read it" title for me.