By Jeff Metzner - October 11, 2010
Supergirl: Death & The Family TPB: Although this book has the “New Krypton” banner on it, it’s only tangentially connected (mainly in the Superwoman origin story.) Instead, as the title suggests, Sterling Gates and Jamal Igle tell stories of the family Kara has created for herself on Earth, including Lana Lang, Linda Lang (Kara’s new secret identity) and the new Inspector Henderson. I was originally going to say that this was a good jumping on point for the current Supergirl team, but I found out in New York that they’re leaving. Still, these stories are good and the issues of the following story arc I’ve read are even better so I still recommend it. I’m sorry to see Gates and Igle go – they couldn’t tell me what they’re doing next – but new writer Nick Spencer (Jimmy Olsen, Morning Glories, Existence 2.0/3.0) is very good and new artist Bernard Chang is also terrific. 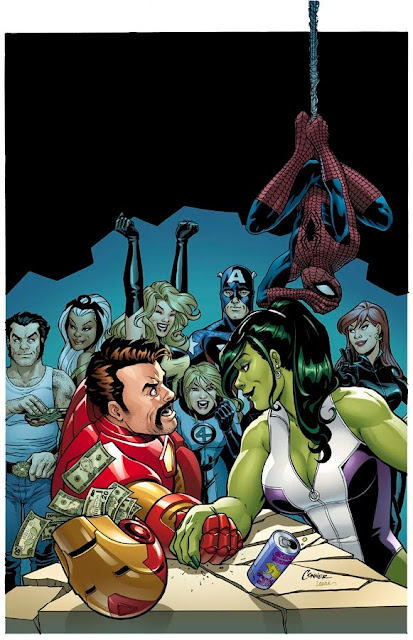 Girl Comics HC: Part of the “Women of Marvel” initiative, this is an anthology by all female creators. All anthologies are a little uneven, but this is mostly great stuff. My favorites are Coleen Coover’s framing sequences, Valerie D’orazio’s Punisher story – I said all female creators, not all female characters – Christine Boylan & Cynthia Martin’s Dr. Strange, Marjorie Liu & Sara Pichelli’s Wolverine & Jubilee, and especially the reunion of Power Pack creators Louise Simonson and June Brigman. The volume also includes well-done biographies of significant Marvel female creators such as Marie Severin and Glynis Oliver. Your mileage may vary, but there’s a significant enough variety of stories here that everyone should be able to find something to satisfy them.

Heralds HC: Regular readers of the blog have heard me sing the praises of writer Kathryn Immonen, mostly in relation to wackier fare like “Patsy Walker Hellcat”, but she is a dramatic writer as well. (See especially her independent work "Moving Pictures" with husband Stuart.) This book is a cross between those styles, sort of a Joss Whedon-style drama, so those of you who wouldn’t get caught reading “Patsy Walker” should find this more to your liking. It’s about a group of female Marvel heroes gathered together (by Scott Summers) to celebrate Emma Frost’s birthday, and what happens to them when a long-forgotten Marvel female falls to Earth. Or does she? Tonci Zonjic, James Harren & Emma Rios share the art chores, I guess because this was originally published as five weekly issues. The art styles match pretty well, except for the last issue which seemed a little “off model” compared to the others and with parts of the ending being a bit more confusing than necessary. But it’s an excellent mix of funny dialogue (“Puppets can make the bravest of us panic.”) and moving drama, and I highly recommend it.