By Shane - September 27, 2010
I have not been this excited for a new comic in quite some time.
In fact, there aren't many comics I've gotten this excited for ever. Tony Bedard's R.E.B.E.L.S. and Keith Giffen's Doom Patrol came close, I suppose. And there was definite excitement in the lead-ups to books like Chew, Final Crisis and The Archie Wedding. But they didn't compare to this.
Why am I so excited?
Because this is Ian Churchill, and he has a new style.
I liked his "classic" style well enough, I suppose. It was like Jim Lee, but cleaner, and his work was a pretty good match for covers by artists like Michael Turner (making their Supergirl run look pretty good, even if the writing...was not my favorite.) But I wouldn't have considered Churchill a favorite artist of mine, not by a long shot.
And then came his hand injury, and the revelation that his "classic" style had been requested by his editors, back when he first started out professionally. His original style was much closer to, say, Darwyn Cooke. You aren't going to get much more different than going from Cooke to Lee, really. And he pulled it off--his Hulk issues had some of the best work I'd seen by him. Were they perfect comics? No. You could see that he still had some problems. But it was a very, very good effort.
Facing the commercial reaction to his Hulk run (sales sort of tanked), I was worried that he'd go back to his more successful style--but then he seemed to vanish out of comics completely for a year or so. It surprised me, actually--he'd been so prolific, and then nothing.
Now I know why.
Marineman is the new, creator-owned book written and illustrated by Churchill, and the style he's chosen to employ is radically different from even his Hulk work. In fact, it reminds me very, very much of one of my favorite artists of all time--an artist that left us far too soon, leaving a huge, gaping hole in the industry's talent pool that has yet to be filled.
Can Ian Churchill be the next Mike Wieringo? I honestly think that he could.
And with the premise of this title, we're even getting one of the dream projects that never happened--the closest thing to a 'Ringo Aquaman series that we will probably ever have.
I am excited. Are you? 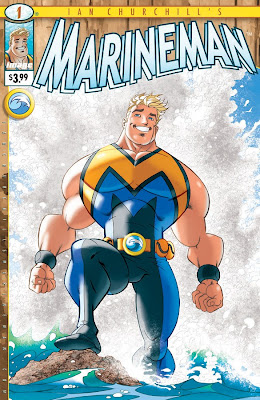 Marineman #1 comes out from Image Comics on December 1st. A preview of the first issue can be seen at the Previews website.