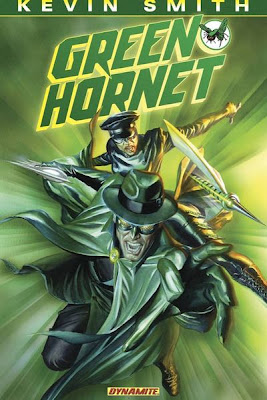 Kevin Smith's Green Hornet HC Vol. 1: "Sins of the Father": Dynamite has a metric ton of Green Hornet titles, but this is arguably their flagship title. It's based on Kevin Smith's unproduced Green Hornet screenplay, but he's minimally involved since he was already paid for his work. Coincidentally, it's similar to what we've seen of the actual upcoming movie so far, with the layabout son of the original Hornet discovering and taking over his father's crusade after his death. Smith has an ear for snappy dialogue which works well here, and it benefits from not relying on the crutches in his R-rated movies. The adaptation is by Phil Hester, one of the best in the business, and it's well drawn by Project Superpowers artist Jonathan Lau. The son is a brat, but that works for this story because it gives him room to grow. I like the idea of a female Kato, as I did when it was first done in 1989, and the elder Kato is an interesting character too. I am disappointed, however, though not surprised that Dynamite released a book of just the first five issues instead of waiting to collect together however many issues the whole script will take. Not great value for the money, but I do like the book so far. Extras: 21 covers, including the Alex Ross alternates.

Thor 611-614: Rather than keeping things in limbo until Matt Fraction is ready, Kieron Gillen chose to use his post-Siege issues to tell a sweeping epic called "The Fine Print". The deals that Loki made with Hela, Mephisto and the Disir resonate even after his death, and Thor is forced to journey to Hell to save what's left of the Asgardian afterlife. There's some really beautiful character work in this arc. Gillen remembered something about Thor's mother that I had forgotten and used it to great effect, and the ending revelation about Loki's motives and how they affect one of the major characters from the JMS run took my breath away. My only (extremely) minor quibble is that there wasn't much room for Don Blake in Gillen's Asgard-centric run, and I hope Fraction uses him more. I think the book works best when there's a balance. This arc is getting collected in November with some 1966 Thor issues, and I highly recommend it.


Incredible Hercules 138-141: This book shouldn't have worked. Starring a second-tier hero and a brand-new character, and slotted into "Incredible Hulk"'s numbering after "World War Hulk", it wouldn't have been surprising if this book sank without a trace. But, and I hate to use the cliche but it fits, the whole of what Greg Pak and Fred Van Lente have crafted is much greater than the sum of its parts and I irrationally love it second only to "Mighty Avengers". It's a buddy comedy and a heroic journey and a coming-of-age story and a father-son drama and a family betrayal soap, just to name a few. The last arc of the series deals with Amadeus Cho's destiny and whether Hercules has to die for that destiny to be fulfilled. My favorite moments of the arc: The Mary Jane "magazine" ad and the Quicksilver/Zeus meeting in #139, the full page of Herc and Amadeus jumping into the breach and their reaction to Haphaestus' trap in #140, and the recap page and Herc & Cho's last scene together in #141. There are two oversize hardcovers collecting the first two thirds of the run, and presumably another one is on the way to wrap it up. Buy them. There's something for everyone here.


Hercules: Fall of an Avenger 1-2: So the title kind of gives away that Herc doesn't exactly make it out of his own series alive, but is he really dead? I prefer the art style of the regular series to the painted style here, but the tales told at the funeral in #1 are great, and the battles in #2 are fun especially Amadeus vs. Phobos.


Heroic Age: Prince of Power 1-4: Amadeus Cho, left alone after the events of the issues above, teams up with Thor to gather the items necessary to tap into the power necessary to get Hercules back. (Title of issue #4: "Omnipotence for Dummies".) On the way, they're opposed by someone fans of Peter David's Hulk run will recognize. The way Cho and Thor see each other and how they interact is much different than the Hercules/Cho relationship -- Thor: "Quickly boy, the book -- which way to this tomb you mentioned?" Cho: *shrugs* Thor: "I hate you." -- the contrasts are interesting and the insights are rewarding. Reilly Brown's art is more to my taste for this material, and it's actually structured so that you can pick up from #1 without having read "Incredible Hercules" (but we've already established that you should.) A great continuation of the story of this amazing partnership, and I look forward to "Chaos War" which this directly flows into.


Batgirl 9-14: I like how Stephanie comes into her own with the "Flood" arc in #9-12, starting with a nice Commissioner Gordon scene in #9, fighting some (zombified) allies in #10-11 and ending with her getting her own version of Oracle since Babs will be (mostly) busy in "Birds of Prey". Normally the crazy computer virus jumping to people stuff would drive me nuts, but in this case I'm (barely) willing to suspend disbelief on the explanation that it's Apokolips technology. I'm less thrilled that it's basically just a tech explanation to do zombies, but it's well enough written by Brian Q. Miller that I accepted it. Long time Stephanie fans will enjoy her character's evolution here. ("I don't break promises. Not anymore.") The Clayface story in #13 is fun (love the cover), and the characterization of Supergirl in #14 was so on point that I actually went back to the credits to see if regular Supergirl writer Sterling Gates had written the issue (he didn't).


I messed with the blog design again. Blogger added a new "super simple" layout that I thought suited our text-heavy blog well. Please let me know if you disagree.