ARCHIE is an American institution, right up there with mom, apple pie, baseball, and small towns.   Awareness through the decades?  Absolutely !  Everybody on the street is familiar in one way or another with Archie, Betty & Veronica, Jughead, Riverdale High, etc. 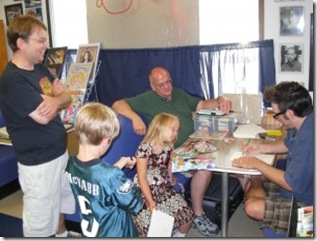 Despite the availability of everything Archie throughout my formative years, I never sought out the books,  cartoon shows, or pop music unless it was handed to me or just happened to provide background noise from the television or radio.   I didn’t dislike Archie & Co.  I just wasn’t interested.  Super-hero fare was much more appealing to me.  I also considered the Archie comics to be formulaic, following a carefully guided script and always adhering to the Archie canon.  Occasionally, I would pick one up just to see.  My opinion was that you could go five years without reading any Archie books and still get caught up quickly after reading a single issue.   They were, are, and remain amusing and entertaining.

Nevertheless, I did enough advance research to compile a few questions for Dan Parent.  You can get a very good overview of his work and background on his excellent website =

Dan’s hometown is St. Albans, Vermont.  He is a 1987 graduate of the Joe Kubert School and became a staff artist at Archie Comics before breaking out and becoming a freelance writer/artist in 1996.    He also taught at the Kubert School for 5 years; and now resides with his family in Milford, PA. 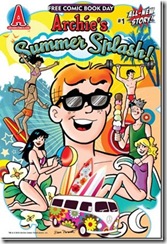 I don’t have any current Archie books in my possession, so I re-read the Free Comic Book Day 2010 Archie Summer Splash book , which I reviewed here on BC Refugees blog spot on May 28th and gave a score of 18.5 points ( highly recommended) on my FCBD rating scale.

After yet another read, I remain impressed.  Parent has a way of imposing his own “spin” on the Archie characters and gives them more of a modern appeal yet without violating that Archie  rule book or “bible” I mentioned earlier.  He does take some liberties yet keeps it just enough under the sonar to avoid the red warning lights.  His art is just right for this type of book.  Very appealing - - gives you that warm and fuzzy feeling inside.  Comfort book. 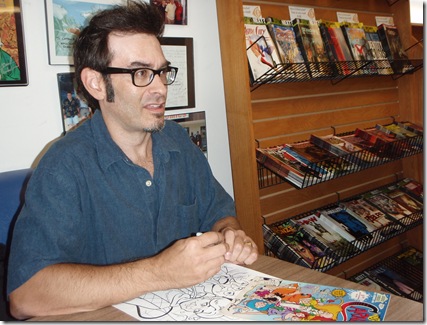 Surely, a man of this talent has aspirations beyond the Archie books.  I wanted to make sure I asked some questions about his future plans and see if he had any five-year or longer goals or pet projects.  Perhaps he was working on an adult graphic novel or something in a different genre away from the teenage / young adult standard fare.

Dan Parent is living his dream.  He didn’t say that directly, but his answers and actions indicated as much. He told me that  he has always wanted to be a part of the Archie family.  He actually applied for work at Archie Comics on three separate occasions beginning with his high school years.  He finally landed the job as staff artist during  graduation from the Kubert School.   The work he is most proud of are some Archie books.  Five years from now . . . . he hopes to still be writing and drawing for Archie Comics.

For awhile I didn’t know how to respond to those answers or what questions to ask next?  I wasn’t disappointed by his responses as much as I was surprised by them.  But who am I to decide what higher aspirations a person (other than me) should have?   And the man appears to be so happy!   After I realized how sincere he was about this it made me happy as well.  I became inspired by this new knowledge.  What this means is there still remains HOPE!  for any of us who crave a certain position or level as long as we muddle on and keep our eyes on the prize.

Dan first started reading comics (and learned to read as a result) at the age of 5.  (“My reading levels shot through the roof!”)  He credits the vocabulary and literary knowledge he came to acquire because of beginning with comics and getting that essential early start.   His mother had a cleaning job, and used to entice him to come along to her various work assignments by bribing him with new comics.   His early favorites were Archie and Harvey Comics (Richie Rich and Casper, The Friendly Ghost).  Even after later moving on to super-heroes (Marvel and DC - - Superman & Batman are favorites) he continued to read and appreciate Archie books. 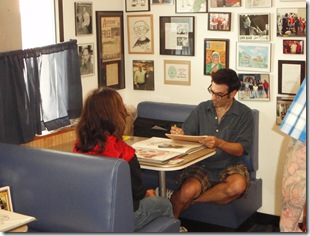 Dan is also proud to be associated with the work Archie Comics are doing with libraries, helping them start up comics and graphic novel sections and offering generous discounts.  Archie Comics always has a display and makes presentation at all the major scholastic book fairs.

Dan’s also getting a lot of attention from the media, and has been interviewed regularly regarding new Archie storylines, including RIVERDALE SHORE , the Jersey Shore MTV series parody.  Upcoming is a Twilight parody, as well as VERONICA ISSUE #200.   Expect to see a big promotional blitz in Fall 2010 to commemorate the 70th Anniversary of Archie.

Two years after graduation from high school (1982), and another rejection from Archie Comics, he decided to enroll in the Kubert School (1984).  When he did finally land a job at Archie (persistence paid off!) he started in production and took on some freelance assignments in the evening.  He mentioned that during his early employment some Archie staff members actually found his art samples submitted back during high school.

His favorite current artists are Darwyn Cooke and Alex Ross.  Neal Adams was his idol while growing up.  He loves the current work of writer Geoff  Johns, and was a big fan of the older Legion Of Super-Heroes done by Paul Levitz (and very happy to learn Levitz is back on a revival of that title).

Dan has also done work for Felix The Cat Comics from 1996-2006, when the parent company discontinued the comics division.  Dan says they are still going strong with toys and licensing, and Felix The Cat is still very popular in Japan.   He was nice enough to honor my request for a sketch of Felix - -  in the famous head-shot-with-claws pose from Wolverine’s  first limited series (by Chris Claremont & Frank Miller). 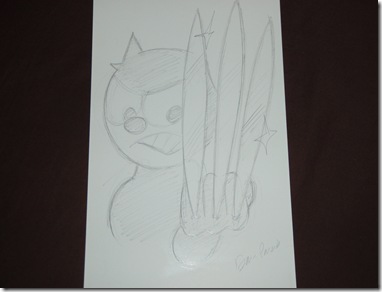 The works he is proudest of are the BETTY & VERONICA SPECTACULAR and the  ARCHIE & VALERY  (from Josie & The Pussycats) romance, which he wrote.   If he could work on any book he wanted to, he would most like to get the writer/artist assignment for a monthly JOSIE & THE PUSSYCATS series.  He contents himself with the occasional special issue for now.

I had to ask this question of Dan = “Betty or Veronica?”  His immediate answer = “RONNY”.

Dan’s advice for aspiring writers and/or artists is to “stay at it” and learn the value of persistence.  “Accept rejection as a necessary learning tool.”   Just keep doing it.  He recalls the senior Joe Kubert’s advice during his school days = “You have to make 100,000 drawings  to get the bad art out of your system!”

Dan drove three hours to be the guest at Captain Blue Hen Comics (Newark, DE) on June 26th and stayed several hours, honoring requests for sketches and conversing with his young and older fans.  He possesses an incredible recall of his work and Archie Comics, able to identify the issue that a particular drawing appeared in, etc.  He was always gracious and considerate of the fans and very appreciative of the attention.