A Brightest Day; A Heroic Age

By Shane - July 27, 2010
In early 2010, both DC and Marvel took their companies in new directions, choosing to commemorate those occasions with powerful new storylines.  For DC, it was Brightest Day, fundamentally tied to the stories Geoff Johns had been telling in Green Lantern and Blackest Night; for Marvel, it was The Heroic Age, celebrating the end of the dark era begun with Avengers: Disassembled, concluded in Siege.  Both directions have their merits, and both launched new titles.

I haven't had much time or inclination to post on this blog lately, but I felt a need to take the time today.  Two of these titles are just phenomenal, and absolutely worth a look.  I think that DC and Marvel are really publishing some fascinating material, with original stories and engaging characters. 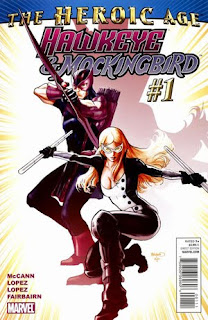 Hawkeye and Mockingbird, by Jim McCann, David Lopez and Alvaro Lopez, is, by far, my new favorite title from either company.  McCann and Lopez had the opportunity to play with these characters last year in the Dark Reign miniseries New Avengers: The Reunion.  The title--starring Clint Barton as the enigmatic Ronin, and his long-thought-dead wife Bobbi Morse as Mockingbird--allowed the characters to interact on both a personal and professional level.  On one hand, they had to figure out where they stood in their relationship--or even if they still had a relationship--after Mockingbird was abducted and replaced by a Skrull years earlier.  On the other, they engaged in a series of espionage adventures, working with Morse's new organization, the World Counterterrorism Agency (with an acronym that has a powerful significance to both characters.)

The Reunion miniseries was good.  This new title is better.  In Reunion, McCann was forced to tie up loose ends from Secret Invasion (and even West Coast Avengers from fifteen years prior!), while in Hawkeye and Mockingbird, he's free to focus on the future, spinning new stories without looking back.  That's not to say that the title ignores its history, spotlighting supporting characters such as Dominic Fortune and villains such as the Phantom Rider, but rather that it takes those bits of history and spins them into completely new directions, laying out the groundwork for a title that could--and should--continue for years to come. 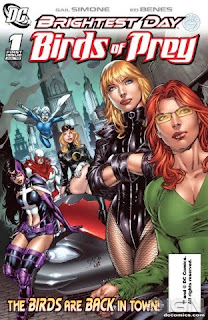 In many ways, Birds of Prey is DC's spiritual counterpart to Hawkeye and Mockingbird, and even earns the distinction of being my sister's favorite new title.  This book originally had a long run, and although accomplished comics scribes Chuck Dixon, Terry Moore, Sean McKeever and Tony Bedard all put their stamp on the title, most would agree that Gail Simone penned the iconic run.  Although the first ongoing volume was canceled over a year ago, many people--including Geoff Johns, one of DC's top writers--pointed out that Birds of Prey had left a void no other title could fill.  And so, it was announced--to great fanfare--that Gail Simone and superstar artist Ed Benes (who was the first artist to work with Simone on the title years ago) would relaunch the book, tying in to DC's new Brightest Day banner.

Along with talented supporting artist Adrian Melo, Simone and Benes have stressed the characters as the 911 to the DC universe, truly stressing just how important they've become in recent years (after all, Black Canary led the Justice League, and Oracle operated has operated for years as information central to superheroes everywhere).  In the new title, the classic team of Oracle, Black Canary, Huntress and Lady Blackhawk have been joined by the recently-returned Hawk and Dove, who both played significant parts in Blackest Night and continue to do so in Brightest Day.  The title can certainly stand on its own merits, however--it never fails to surprise with every page, and even three issues in, I'm at the edge of my seat waiting to see how the story arc turns out.  Welcome back, Birds of Prey.  You were missed.