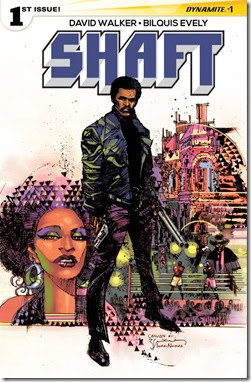 John Shaft, described as a "tough, take-no-guff detective" and "private dick that's a sex machine to all the chicks" in composer/singer Isaac Hayes' Oscar-winning Theme from Shaft, has gone toe-to-toe with organized crime bosses, stood up to the cops, squared off against kidnappers, and foiled assassination attempts in his novel and film appearances.  But who was John Shaft before he became the hardboiled investigator with a reputation as big as New York City itself?  For the first time ever, the detective's origins are explored, courtesy of the new series by Dynamite Entertainment. 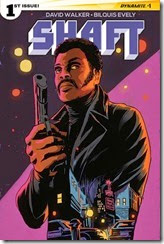 "Working on Shaft, one of the most iconic characters in pop culture, is a dream come true," says David F. Walker. "I've been a fan of the character since I was a kid, and especially love him in his original iteration, as created by author Ernest Tidyman.  My take on Shaft is steeped in Tidyman's work, and builds on the world created in the original novels.  I'm exploring who he is as a man, as a private detective, and as a cold-blooded killer.  This John Shaft is much grittier, more badass, with a complexity never seen in the films.  The name may be familiar, and some aspects of the character may be recognizable, but at the end of the day, he will be something new and exciting - especially in the world of comics.  This is Shaft the way Shaft was meant to be." 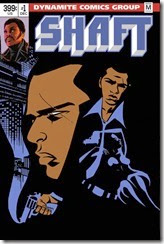 David F. Walker is an award-winning journalist, filmmaker, and author of the Young Adult series The Adventures of Darius Logan.  His publication BadAzz MoFo became internationally known as the indispensable resource guide to black films of the 1970s, and he is co-author of the book Reflections on Blaxploitation: Actors and Directors Speak . His work in comics includes the series Number 13 (Dark Horse Comics), The Army of Dr. Moreau (Monkeybrain Comics), and The Supernals Experiment (Canon Comics).

Bilquis Evely is a rising star on Dynamite's roster of talented artists.  Recently she worked alongside writer Chris Roberson on the critically acclaimed Doc Savage miniseries.  Her other works include The Shadow / Green Hornet: Dark Nights crossover event with writer Michael Uslan, The Shadow Annual #1, and Miss Fury.  Evely's experience with Dynamite's pulp heroes has made her the perfect fit for the mean streets of 1970's New York City in Shaft. 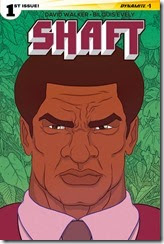 Shaft #1 will be solicited in Diamond Comic Distributors' October Previews catalog, the premiere source of merchandise for the comic book specialty market, and slated for release in December.  Comic book fans are encouraged to reserve copies of Shaft #1 with their local comic book retailers . Shaft will also be available for individual customer purchase through digital platforms courtesy of Comixology, iVerse, and Dark Horse Digital. 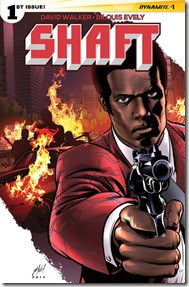 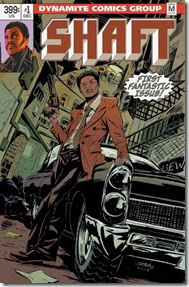