Now that I’m entangled in the AVENGERS VS X-MEN net,  I picked up some back and current issues in a haphazard attempt to update myself on their current events.  Since I chose the side of THE AVENGERS it’s been mostly Avengers-related books so far . . . . . . . . . . and as you may suspect - - - spoilers are everywhere. 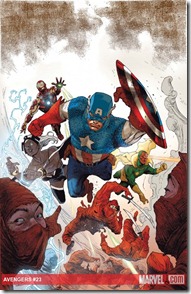 I haven’t read this title since the opening story arc.  The line-up has changed since then.  Current membership includes Iron Man, Hawkeye, Spider-Woman, The Protector, Jarvis, Captain America, Storm, The Vision, The Red Hulk and Quake.  I picked this up mostly because I saw The Vision on the cover  (my favorite Avengers member of all time).  It’s also nice to see The Hulk back on the team, even if it is the Red Hulk.

I am grateful for the synopsis that explains what occurred in the prior issues.  It wasn’t hard to pick up the story from this point and follow it.  Norm Osborn has escaped from prison, resurrected  the H.A.M.M.E.R. organization and is playing the “dirty politics” game of pointing the finger at The Avengers and accusing them of various crimes against the citizenry.

Osborn is obviously mad.  The federal government is not complying with his ultimatum to re-appoint him as director of all defense systems.  He holds most of the Avengers hostage and has the combined might of A.I.M., Hydra and The Hand to back him up.  Even the government can recognize a crazy, misguided person.  Unfortunately,  not all of the citizenry can and some of the local population believes that Osborn is “the man.”  Sometimes closet fanatics are just looking for someone like-minded to follow.

Some Avengers escape, others are re-captured and the issue ends in a showdown with Osborn (who didn’t get the message) proclaiming:  “By the authority vested in me as leader of the World Peacekeeping Task Force, I, Norman Osborn, hereby declare you enemies of the State.”  Yawn.  In spite of the action nothing here has really got me excited about this story.  Daniel Acuna does a first-class job on the art, using a little shadow and dark colors here and there - - but nothing excites me here either.

Thanks to the science team at A.I.M. labs, Osborn now has super-powers a la The Adaptoid.   Dan Acuna likes to shade a lot of panels as if everything were being viewed through either infrared goggles or black light, and it becomes annoying when the faces stay red in succeeding panels.  A little of this goes a long, long way.  Sigh.

Norman doesn’t succeed.  How he is defeated is hinted at earlier in the story but not clearly defined when the moment comes  - - so it’s normal to feel confused (as I did).  Sloppy work here, Bendis.  How The Avengers (with an assist from The New Avengers)  can take down so many of Osborn’s team when they are clearly outnumbered is not clearly defined either. I guess Bendis didn’t want to take anymore time trying to tie up the loose ends.  Maybe eager to get onto the next story.

Oops, looks like they let Madame Hydra escape (along with “the science of the super-powered community in her pocket.”)  The last page of this issue shows her rallying the forces for a new Hydra initiative.

It’s this type of grind-it-out (formula) story that makes me restless and bored.  More of this and I’ll be turning my back on standard super-hero titles again.

I was getting very discouraged after reading those last two issues.  Now this is more like it!

It was the return of  The Vision that persuaded me to pick up this title and give it another chance . . . and it may be The Vision that keeps me hanging around longer.  This issue focuses on his character and it’s a great story.  If you only can pick up one of the four books reviewed here, make it this one. 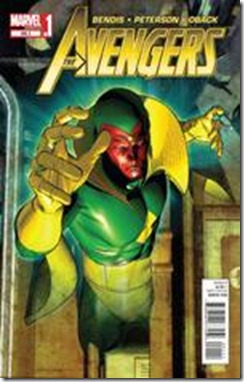 The artwork by Peterson is a major, major improvement over Acuna.  Action scenes are more dynamic. Character close-ups are more expressive.  There are some very exciting panels to view here.

The Vision is nearly back to full strength and function and is starting to ask questions about what has happened since his dormancy/absence as well as why things happened to him.  He learns that it wasn’t a fully-in-control She Hulk that ripped him in half.  It was his former wife, Wanda/Scarlet Witch who controlled/manipulated those events.

The Vision’s quest for information related to Wanda leads him to Utopia and a confrontation with his father-in-law, Magneto. Magneto does not welcome the intrusion and questions and both sides threaten great harm to each other, but neither side really acts on it.  It’s ironic that Magneto has worked so long for the cause of mutant rights while he seemingly displays little regard or empathy for the feelings or needs of an android/robot.   The only thing that stays his hand is the knowledge that The Vision was the one person who made it possible for his daughter to experience true happiness for a short while.

I especially enjoyed the ending of this story, with Captain America consoling a distraught Vision.  He also knows “what it feels like to wake up in a world that you don’t understand anymore” and urges that “you need to look forward.”  Classic story.  If you are a long time Avengers fan  -- you will want to read this issue. 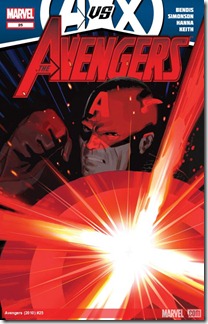 When I saw the cover to this issue cast in dark red light I thought Acuna must be back on art again.  Fortunately (for me) he just worked on the cover art.  Another artist takes over and it’s a veteran - - Walt Simonson.  As may be expected, Simonson’s style brings a classic feel to this book.

This book features the A vs X banner on the cover and is a tie-in to the AVENGERS VERSUS X-MEN series, although only three pages of this issue focus on events related to it.

Most of this issue focuses on Captain America’s dissatisfaction with how the public currently perceives the current Avengers team and his discouragement in his new role as head of world security.  He gets a pep talk from the returning Thor.  No sooner does Cap share that “I just need a win.  A solid, unqualifiable win.”  than Noh-Varr/Protector discovers the location of A.I.M.’s major hidden lab.  So a major battle ensues and Cap gets his wish.  The best part of this is that Simonson gets to portray some battle scenes which are lots of fun to observe.  However,  it wasn’t very satisfying and I’m getting bored again.

The last page with the big reveal of a potential traitor within the Avengers and a new plot thread/complication related to the Phoenix Force arrival holds some promise.  It’s either going to enhance that storyline or just needlessly complicate it.  Time will tell.