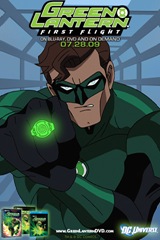 This is the latest DC Animated feature – apparently they’re doing well since Superman/Batman: Public Enemies is due in just a few months. I liked this even better than the previous Wonder Woman movie (which I liked a lot too) because it made better use of the short running time. It starts with Abin Sur giving the ring to Hal Jordan on Earth, but it only stays on Earth for about 10 minutes and then the rest of it is a big intergalactic action/adventure flick. When Hal gets to space and meets the Guardians (not as stuffy here as they are in the comics) he’s hooked up with Sinestro as his training officer. Eventually – and I don’t think I’ll shock you by saying this – they don’t see eye to eye and Sinestro attacks the Corps with a yellow ring. (They keep it simple, though – none of the emotional spectrum and other colored Corps from the comics.) The voice acting is what makes it: Hal and Sinestro have the majority of the speaking parts and they’re played by two great actors. Christopher Meloni (Law & Order: SVU, Oz) plays Hal and Victor Garber (Alias, Eli Stone) plays Sinestro. It’s not deep, but the whole thing is a lot of fun. (A couple of scenes might be a little too intense for younger kids, but they go by pretty quick.)

The extras on the one-disc version aren’t impressive – surprisingly there is not a commentary track but there is a mini making-of preview of “Superman/Batman” (fun mostly because they reunited the voice cast of Superman, Batman, JLU, etc.) and a short feature of Geoff Johns and Dan Didio talking to the camera about “Blackest Night”. The two-disc version also includes more mini-features about current GL comics, the Green Lantern episode of “Duck Dodgers in the 24th ½ Century” from 2003 (featuring Daffy Duck as a Green Lantern and Kevin Smith as the voice of Hal Jordan – I swear I’m not making this up) and a “Justice League Unlimited” time travel two-parter that has a brief Hal Jordan cameo.