Contribute to three charities and get huge Valiant bundle in return

Editor’s Note:  This is a great way to make a contribution (of your choice) and get a ton of digital copies of great Valiant books.  Donate $15 or more and also get access to the original Valiant masters  from the 1980’s.  A very worthwhile use of your charitable dollars, and a great bargain as well.

PRESENTING THE HUMBLE VALIANT BUNDLE – A MASSIVE DIGITAL COMICS COLLECTION BENEFITING DOCTORS WITHOUT BORDERS, THE HERO INITIATIVE AND CBLDF!
Pay what you want for Valiant’s ultimate digital comic collection of your favorite titles and characters, while supporting charities that make truly heroic differences around the world. 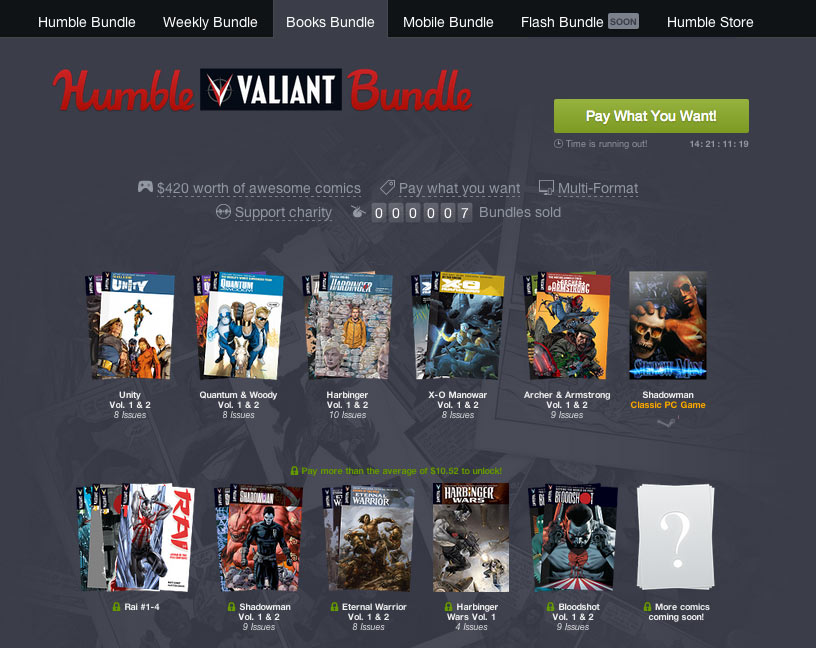 Fans can name their price to receive the first TWO volumes of X-O Manowar, Archer & Armstrong, Quantum and Woody, Harbinger and Unity. Plus: get the classic Shadowman video game as an extra-added bonus!
Contribute more than the average price to get even more of Valiant's blockbuster publishing line with the first two volumes of Bloodshot, Shadowman and Eternal Warrior – plus the first volume of Rai and Harbinger Wars!
For $15 or more, Valiant will open the vaults and unleash the entire Valiant Masters digital series, showcasing the legendary origins of one of the greatest universes in comics. Re-presenting the original adventures of Ninjak, Rai, Bloodshot, Shadowman, and H.A.R.D. Corps – plus a Humble Bundle-exclusive Valiant Masters volume of classic X-O Manowar not available in print – the Valiant Masters series celebrates Valiant's historic legacy, and include dozens of pages of rarely seen bonus materials and special features.
"The Humble Valiant Bundle is by far one of our proudest achievements," said Gavin Cuneo, Valiant’s CFO and Head of Strategic Development. "While this is a fantastic opportunity for readers to access the Valiant Universe, what makes this partnership so important is the support it provides to three incredible charities with crucial missions in comics and around the world. Each of the organizations – Doctors Without Borders, the Hero Initiative, and the CBLDF – serves an incredibly important cause, and finding a way to further their missions with the support of Valiant's fans around the world was just too good to pass up."
The Humble Valiant Bundle runs for two weeks beginning Wednesday, September 17, 2014 and ends Wednesday, October 1, 2014 at 11 a.m. PDT.
About Humble Bundle
Humble Bundle organizes pay-what-you-want plus charity promotions for awesome digital content and puts the power directly in the hands of the consumers, offering them fully-featured titles at prices they set themselves. Consumers pay what they want and decide how to allocate their money between publishers, charity and a humble tip. Humble Bundle also offers the Humble Store, a digital storefront that features great games at great prices with a portion of sales going to select charities. Since the company's launch in 2010, Humble Bundle has helped empower its community to allocate more than $45 million toward charity to date. For more information, please visit https://www.humblebundle.com. 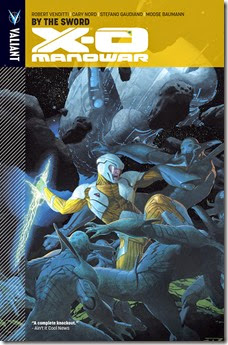 About Valiant Entertainment
Valiant is a leading character-based entertainment company with a library of over 1,750 characters, including X-O Manowar, Bloodshot, Shadowman, Eternal Warrior, and many more. Established in 1989, Valiant has sold over 80 million comic books, and today its characters continue to be forged in publishing, licensing, film, video games, and beyond. Since its summer 2012 relaunch, Valiant has returned to the fore as one of the most highly regarded publishers in comics, winning a 2012 Diamond Gem Award for Comic Book Publisher of the Year. Visit them online at ValiantUniverse.com.
About Doctors Without Borders/Médecins Sans Frontières (MSF)
Doctors Without Borders/Médecins Sans Frontières (MSF) is an international, independent medical humanitarian organization that delivers emergency aid to people affected by armed conflict, epidemics, natural and man-made disasters, and exclusion from health care in nearly 70 countries.
About The Hero Initiative
The Hero Initiative is the first-ever federally chartered not-for-profit corporation dedicated strictly to helping comic book artists and craftsmen in need. Hero Initiative creates a financial safety net for yesterday’s creators who may need emergency medical aid, financial support for essentials of life, and an avenue back into paying work. It’s a chance for all of us to give back something to the people who have given us so much enjoyment.
Since its inception, The Hero Initiative has had the good fortune to grant over $700,000 to the comics veterans who have paved the way for those in the industry today.
About the Comic Book Legal Defense Fund (CBLDF)
Comic Book Legal Defense Fund is a non-profit organization protecting the freedom to read comics! Our work protects readers, creators, librarians, retailers, publishers and educators who face the threat of censorship. We monitor legislation and challenge laws that would limit the First Amendment. We create resources that promote understanding of comics and the rights our community is guaranteed. Every day we publish news and information about censorship events as they happen. We are partners in the Kids' Right to Read Project & Banned Books Week. Our expert legal team is available at a moment's notice to respond to First Amendment emergencies. CBLDF is a lean organization that works hard to protect the rights that our community depends on. Please support our important work!