This article has been compiled from several official press releases . . . . .

Debuting this June and available for pre-order in the April 2015 PREVIEWS catalog (Diamond Code FEB150906) is CLAY’S WAY COLLECTION MAGAZINE – reprinting 140+ comic strips from the online web comic strip at ClaysWay.com.  Young Clay and his best friend Pan handle life, ADHD, Dyslexia and keeping batteries in their light sabers.  The strip takes a humorous approach to a serious issue and offers guidelines, advice and links for parents of children with learning “differences” (as opposed to calling them learning disabilities).

The book is published by new company AFTERBURN, who recently entered the crowded super-hero comic book market with some original creations.  BC Refugees has been following their progress and noticed some interest and momentum building for their line.  CLAY’S WAY is a nice addition, which shows they are willing to invest in properties to promote worthwhile causes along with developing a line of standard comics and graphic novels. 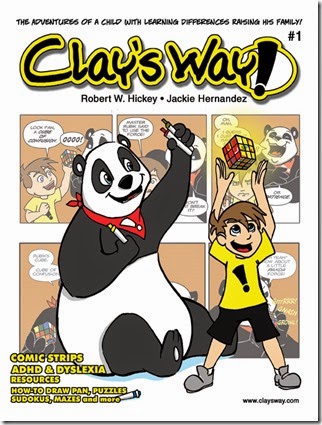 The Clay’s Way web site gives some background on the comic strip . . . . .

“This site is the work of Katie and Robert Hickey.
Robert is a comic book writer and artist who also owned a comic book store in Florence, KY.
For over twelve years Katie has worked hard to make sure her boys get the education that they desire while working a full time job. Katie also came up with the term “Learning Differences”.
Robert came up with the idea of Clays Way to share information and resources for other parents. Being an artist Robert decided to feature a comic strip based mostly on true events that he and Katie have observed with both of their sons who have Learning Differences.
ClaysWay.com features one comic strip update a week and with updates to the resources, blogs and more.

“We wouldn’t want our children to be any different. They have educated us in so many ways and have given us a new way to see life on a daily basis.”
-Robert” 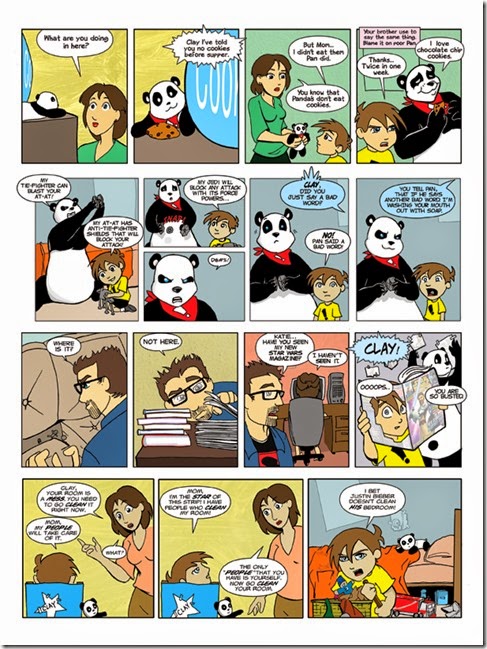 About AFTERBURN:
With over 25+ years of manufacturing and publishing history, Robert W. Hickey, along with his brother Mike and co-creator Bill Nichols, has started AFTERBURN, a publishing arm that offers comics books, graphic novels and special items to stores in print and digital formats.
Robert is the co-founder of Blue Line Art, the original manufacturer of professional comic book art boards. Blue Line has supplied thousands of artists over the years with quality art boards and supplies. Blue Line was the first to package and offer art boards to retail outlets with over 40 different products that support comic creators.
Robert helped create Sketch Magazine (along with Bill Nichols as the current senior editor), offering comic creators their own magazine to learn and share tips and creative techniques of the industry.
The founding force is SkyStorm Studio, where Robert has created comics for over 25 years. Within that time he has created top-selling comics for distribution into mainstream outlets such as Wal-Mart, Toys R Us and comic shops around the world.
AFTERBURN's goal is pulling together new and established talents such as Tom & Mary Bierbaum (Legion of Superheroes, Legionnaires), Greg Land (Iron Man, Avengers), Beau Smith (Guy Gardner, Wildcat from DC) and Chris Dreier just to name a few to create quality and entertaining stories.