EDITOR’S NOTE:  Following the recent announcement that Issue #25 will end the current series, we continue to explore the HARBINGER title from Issue #1 forward as a tribute to the best Valiant title  - - so far.  Here’s hoping something just as special replaces it.

The second story arc wrapped in Issue #8 with the formation of the Renegade team and subsequent pursuit of them by forces of Project Rising Sun. 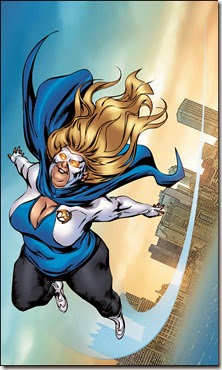 This issue focuses on Faith Herbert, with an in-depth exploration of her character and psyche.  She is certainly one of the more complex members of The Renegades, overweight, lonely and insecure, but very idealistic and eager.   At the end of the second story arc, she fell into a forest after losing control of her flight powers, and was knocked unconscious.    In her comatose state, her subconscious reviews her past including the loss of her parents at a young age, life with an ailing grandmother,  and her introduction to Peter Stanchek who helped make her powers manifest.

Faith’s parents were geeks and while still alive they raised their infant daughter Faith on all things popular culture.  She held onto this to the present time, and rightly so for her grandmother gave her words of wisdom to help cope:  “And I have a trick for you, Faith.  If you want your parents to always be by your side and in your mind . . . . . you must keep the 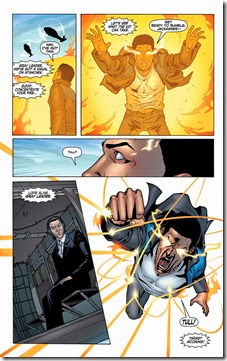 things and ideas that made them happy in your heart.”  It also explains why Faith references geek culture to help her remember dates, as in “The year the Scott Pilgrim movie came out, Nana began to get dementia.”

The art in this issue is very expressive and helps moves the story along at a fluid pace. The colors and ink team deserve special mention.

Project Rising Spirit, under the direction of the creepy Mr. Tull, manages to capture all the other members of the Renegades.  Non-powered Kris manages to put some doubt into Tull’s mind through the power of suggestion.  Tull is made to feel like a Tool.  It’s up to the only free remaining member, Faith, to wear the white Harbinger-supplied uniform and/or costume and become Zephyr in order to make a superhero styled rescue of Peter once again  - - just as the psiot helicopter transports arrive to take him and his team away. 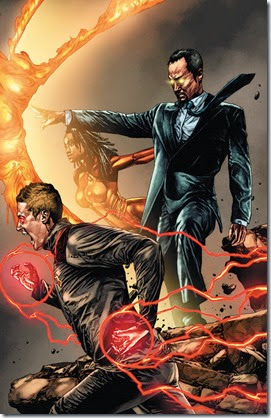 Despite the change to an artistic team effort this issue,  the transition to various illustrators comes off seamlessly.  There are subtle changes in the look and style but if you are engrossed in the story you may not even notice them.  Good work from the art group to make it look this good. Give some credit to a steady job by the two stalwarts on color art and letters.

The introspective microscope turns back this issue to mainstay Peter Stanchek.  While in a subdued state and struggling to rise out of it, his thoughts turn to reflection and what might have been.  The only true friend he’s had in the last several years is his mental patient inmate and partner, Joe Irons.  Peter feels personally responsible for his death 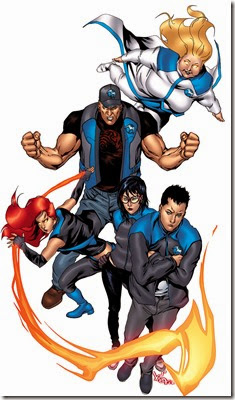 (although he is not the cause) and fears he is taking his new friends / partners down the same perilous path.

Peter puts himself into a mental funk again due to the activities he has to engage in to extricate his team (with the help of Faith / Zephyr) from P.R.S.’s suffocating embrace: deceit, trickery, manipulation, and pure lobotomizing mental force.

The Renegade members have to make a leap of faith (ha!) in order to escape and experience their own personal big fall.  Flamingo learns out to utilize her thrust powers.  Upon landfall, every one learns the true nature of Torque - - he’s a physical psychic projection of a weak, crippled invalid.  The Renegades seem to be bonding together as a team and beginning to look to and trust Peter’s decisions.  Good stuff here.  Don’t miss out.

NEXT:  THE HARBINGER WARS cross over.